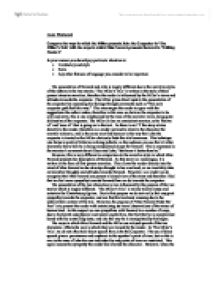 Laura Westwood Compare the ways in which the Miller presents John the Carpenter in 'The Miller's Tale' with the ways in which Miss Fozzard presents Bernard in 'Talking Heads 2.' In your answer you should pay particular attention to: * Vocabulary and style * Form * Any other features of language you consider to be important. The presentation of Bernard and John is largely different due to the narrative styles of the authors in the two stories. 'The Miller's Tale' is written in the style of third person intrusive narration, therefore the reader is influenced by the Miller's views and attitudes towards the carpenter. The Miller gives direct input to the presentation of the carpenter by expressing his feelings through comments such as "This sely carpenter goth forth his wey." This encourages the reader to agree with the suggestions the author makes, therefore in this case we believe the carpenter to be silly and na�ve, this is also emphasized by the tone of the narrative voice, being quite diminutive of the carpenter. The Miller is also an omniscient narrator, so he 'knows all' and 'sees all' that is going on in the text. ...read more.

Here, the speech of Nicholas emphasises his dismay and shows his state of mind, amusing the audience at his talk about elves and sprites. Therefore John is portrayed as a feeble, pathetic character. Nicholas has far more direct speech and is obviously the dominant speaker in exchanges between Nicholas and John, who is largely a passive listener. This is seen when Nicholas begins to involve John in his plot. He has many lines of speech whereas John only cries out things such as "Allas, my wyf." Bernard's attitudes come through in the story by the existence of non- verbal actions, which is especially expressed in 'Bernard suddenly throws back his head and yawns.' This seems quite rude of Bernard, and this is intensified by the use of the adverb, 'suddenly' which suggests a purposeful action. As he cannot at this stage talk, his actions are prominent in the presentation of his character. However, when he does begin to regain his power of speech, it is amusing that his first word is, "cow" and this is aimed at his sister. This reinforces with language the conflict we have previously seen by the use of the yawn. ...read more.

The repetition of this phrase effectively instils an image of the carpenter into the reader's mind. We are influenced by this and take the persistent views as fact. It is also emphasized by the contrasting epithet used to describe Nicholas, "hende Nicholas." This further diminishes the status of the carpenter as he is portrayed in a far less favourable light by the Miller, than essentially his 'rival.' The Miller also repeatedly makes reference to the term, "wood" which means 'mad,' an example being "crien 'water' as if he were wood" This essentially becomes the way in which John the carpenter is ridiculed by Alison and Nicholas at the end of the tale. The Miller explains that people in the village "in ronnen for to gauren on this man" they ran to stare at him. Again, Nicholas is held in higher status than John at the end where Nicolas was "anonright heeld with oother" so the people of the town believed a student over John the carpenter. In the same way that the epithet is used by the Miller, the way in which Miss Fozzard refers to Bernard in comparison to other characters, also influences the reader's view of Bernard. Miss Fozzard refers to her brother by first name terms only, which on the surface may seem to indicate a close relationship between the two characters. ...read more.