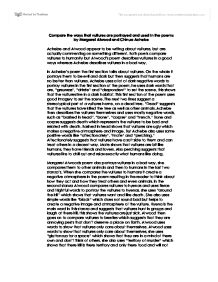 Compare the ways that vultures are portrayed and used in the poems by Margaret Atwood and Chinua Achebe Achebe and Atwood appear to be writing about vultures, but are actually commenting on something different. Both poets compare vultures to humanity but Atwood's poem describes vultures in a good ways whereas Achebe describes vultures in a bad way. In Achebe's poem the first section talks about vultures. On the whole it portrays them to be evil and dark but then suggests that humans are no better than vultures. Achebe uses a lot of dark negative words to portray vultures in the first section of the poem, he uses dark words that are, "greyness", "drizzle" and "despondent" to set the scene, this shows that the vultures live in a dark habitat. This first section of the poem uses good imagery to set the scene. The next two lines suggest a stereotypical part of a vultures home, on a dead tree. "Dead" suggests that the vultures have killed the tree as well as other animals. Achebe then describes the vultures themselves and uses mostly negative words, such as "bashed in head", "bone", "corpse" and "trench." ...read more.

Atwood does not use any words to portray vultures in a positive way but makes this makes humans look bad which is the message of the poem. Atwood and Achebe both describe vultures in a negative way to show how bad humanity is. But Atwood uses no positive words where as Achebe uses some positive words, which suggests that he does not want to put down humanity completely and wants to show there still is a small bit of good in humanity where as Atwood is all negative words suggesting she just want to get a strict point across that humanity has no good in it and needs to change. Achebe uses small more harsh serious phrases to portray vultures like "swollen corpse", where as Atwood uses long less harsh words to describe the vultures like "gluttonous for a space". Atwood also uses short snappy words that don't mean anything negative but are crucial parts of making the poem portray vultures in a bad way, for example "black." So Achebe finds some good in vultures but uses harsher words than Atwood who does not say anything positive about vultures and uses longer less harsh phrases to portray the vultures. ...read more.

Atwood also asks a question in the last stanza aimed at humanity, she sais "can you do better?" The answer to that question is that no, we can't do better than vultures, this makes the reader want to do good in the world and make it a better place. So the meaning of this poem is that she is getting people that don't save lives or make the world a better place won't to do these things. Achebe and Atwood both make humanity look bad but Achebe doesn't care any more and just tells humans that they are evil. But Atwood want humans to be better as some are but only a little number and she wants everyone to help the earth. The poets both use clever phrases and words to make the poem more persuasive. Atwood's poem talks about humanity in a less harsh way than Achebe but both styles are used to the same effect of showing that humanity has more evil and cruelty in it than it has good. In conclusion I think that both poems put forward to the reader that humanity is bad in there own ways but they are both good ways. I think that Atwood's poem does this better than Achebe's due to the language and clever phrases she used. ...read more.