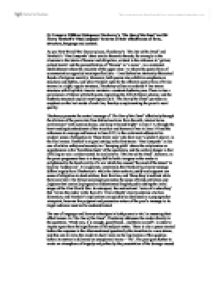 Compare William Makepeace Thackeray's 'The Due of the Dead' and Sir Henry Newbolt's 'Vitai Lampada' in terms of their effectiveness of form, structure, language and context.

Q. Compare William Makepeace Thackeray's 'The Due of the Dead' and Sir Henry Newbolt's 'Vitai Lampada' in terms of their effectiveness of form, structure, language and context. As pre-First World War literary pieces, Thackeray's 'The Due of the Dead' and Newbolt's 'Vitai Lampada' share similar thematic threads, for example in the allusions to the ideals of honour and obligation, evident in the reference to 'gallant, patient hearts' and the personification of 'Honour' as 'a name' , in a contextual establishment where the majority of the upper class - to whom the poetic form of communication appealed most specifically to - lived behind an intricately fabricated fa�ade of religious morality. Moreover, both poems also exhibit an emphasis on structure and rhythm, and while Newbolt opts for the effective poetic form of 8-line stanzas in a tight, regular structure, Thackeray utilises an ordered 4-line stanza structure with 8-syllable lines to maintain a constant rhythmic pace. There is also a prominence of rhyme with both poets employing the ABAB rhyme scheme, and the rhythmic structure explicit most especially in 'The Due of the Dead' provides an emphasis on the last words of each line, thereby complementing the poem's aural quality. ...read more.

dimension, and Newbolt's implications can quickly be dismissed as a propagandist viewpoint; however the poignant and persuasive nature of the poet's message to its target audience must not be underestimated. The use of language and literary techniques in both poems is vital in assessing their effectiveness. In 'The Due of the Dead', Thackeray addresses the reader directly in the quotation, 'Think you, it is enough, good friend...and there an end?', in order to impose upon them the significance of his subject matter. There is also a pause created before the response to the aforementioned question by the transition to a new stanza, and this acts to allow the reader to dwell more on the implication of the question before its answer is delivered on unequivocal terms - 'No'. The poet goes further to create an atmosphere of tragedy and pathos by the presentation of the damage caused by the soldier's death in a list form - 'Parents made childless, babes bereft/Desolate widows, sisters' - with the use of alliteration focusing attention especially on the damage dealt upon beings of utmost innocence. ...read more.

Both poems also employ the use of personification, particularly in their portrayal of England: Thackeray's 'England' is the communion of readers to which his poem is targeted, whereas Newbolt connects England to the cricket game, attributing it with the associated sense of security that is distant in the 'dust and smoke' of war - 'England's far'. In both cases the personification promotes the reader's sense of pride and patriotism, however while Thackeray manipulates this into an appeal to our sense of duty to the relatives and loved ones of England's 'slain soldiers', Newbolt injects accentuation into a paradoxical situation where, albeit the contrast between the safety of England and the horror of war is clearly evident, there is an mordant dimension of parallel in the transference of the 'torch in flame' - representative both of duty and pride - 'to the host behind'. In conclusion, therefore, while William Makepeace Thackeray's 'The Due of the Dead' and Sir Henry Newbolt's 'Vitai Lampada' express differing notions, both poems share a great deal of typicality with respect to context, in the presentations of their respective thesis. ...read more.