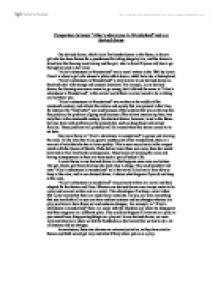 Comparison Between Alice In Wonderland and Our devised Drama

These problems will probably still be around when this drama comes to its set date. One main theme in "Alice's adventures in wonderland" is games and learning the rules. All the time that Alice goes to another part of her wonderland, there is a new set of rules that she has to learn quickly. This is seen very clearly in the croquet match with the Queen of Hearts. If she did not learn these new rules, then she would have had to face very harsh consequences. These basics of learning the rules and having consequences in them are very much a part of today's life. ...read more.

As you can write everything that you can think of, as you can have endless costume and set changes whereas in a play you have to have fewer set and costume changes. For example, in "Alice's adventures in wonderland" there is a scene with the Cheshire cat, where he disappears and then reappears in a different place. This could not happen if it was set as a play, as you cannot have disappearing things on a play set. In our devised drama, we were very restricted as to when we did the flashbacks as that meant that we had to do a lot of costume and set changes. In conclusion, these two dramas are extremely similar, as they have similar themes and both would get very restricted if they where put on as a play. ...read more.