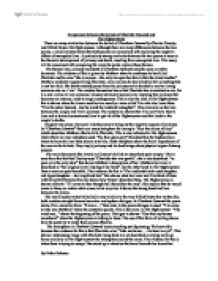 Comparison between the ballads of Charlotte Dymond andThe Highwayman

Comparison between the ballads of Charlotte Dymond and The Highwayman There are many similarities between the ballad of Charlotte Dymond by Charles Causley and Alfred Noyes The Highwayman. Although there are many differences between the two poems, a close analysis shows that both poems are concerned with exploring the negative effects of unrequited love. A particularly strong similarity between the two poems is seen in the thematic development of jealousy and death, resulting from unrequited love. This essay will be concerned with comparing the ways the poets explore these themes. The themes love, jealousy and death in Charlotte Dymond could be seen as rather dominant. The evidence of this is given by Matthew when he confesses he has killed Charlotte and he cries "she is as pure...the only sin upon her skin is that she loved another". ...read more.

Imagery also plays a key part in both poems to bring out the negative aspects of jealousy. In "Charlotte Dymond" there are many metaphors for example: "face the colour of clay" which describes Matthew after he kills Charlotte. This is also reflected in The Highwayman where there are also metaphors used: "his face grew grey" this describes the highwayman when he hears his love Bess dies to save him. Both metaphors show the facial expressions of the men in the ballads. They imply jealousy and its deed brings about physical signs of strong passion. The main characters (the lovers) in Causley's ballad are described quite simply. This is seen from the fact that Causley says "Charlotte she was gentle", she is also described: "as pure as is the early dew" this shows Matthew's description of her. ...read more.

This is the same in The Highwayman: "The wind was..." shows the beginning of the poem. Dialogue is shown: "One kiss my bonny sweetheart" when the Highwayman is talking to Bess. The use of this form of writing shows how the poets try to make their poems effective. The atmosphere in Charlotte Dymond seems touching yet depressing. We know this because the evidence for this is that Charlotte cries "Take me home... I lie here in a pit". This shows a distressing image with Charlotte lying dead in a pit described as crying out to go home similarly in The Highwayman the atmosphere seems the same. The evidence for this is when Bess is trying to escape "she stood up to attention the barrel beneath her breast-her finger moved...and warned him with her death. This shows a heartbreaking image of Bess sacrificing her self for her love. ?? ?? ?? ?? By Nisha Rahman ...read more.

This student written piece of work is one of many that can be found in our University Degree E.B. White section.