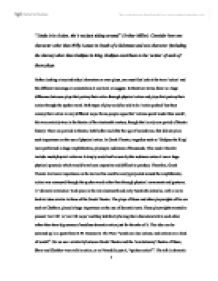 Consider how one character other than Willy Loman in Death of a Salesman and one character (including the chorus) other than Oedipus in King Oedipus contribute to the 'action' of each of these plays.

"Linda is in Action, she's not just sitting around" (Arthur Miller). Consider how one character other than Willy Loman in Death of a Salesman and one character (including the chorus) other than Oedipus in King Oedipus contribute to the 'action' of each of these plays. Before looking at any individual characters or even plays, one must first look at the term 'action' and the different meanings or connotations it can have or suggest. In theatrical terms, there is a huge difference between plays that portray their action through physical action and plays that portray their action through the spoken word. Both types of play could be said to be 'action packed' but they convey their action in very different ways. Some people argue that 'actions speak louder than words', this was certainly true in the theatre of the nineteenth century, though that is only one period of theatre history. There are periods in theatre, both before and after the age of melodrama, that did not place such importance on the use of physical action. In Greek Theatre, tragedies such as 'Oedipus the King' were performed in huge amphitheatres, playing to audiences of thousands. This made it hard to include much physical action as it simply would not be seen by the audience unless it was a huge physical spectacle which would have been expensive and difficult to produce. ...read more.

By looking at The Messenger's contribution to the play we focus not on the events that have occurred but the manner in which we hear about them. The noble King has carried out some horrific events but the only person who can make this public and confirm its truth is a nameless messenger. To put this in Aristotelian terms, The Messenger brings about a 'Reversal' "A change to the opposite of the actions being performed... in accordance with probability or necessity"7. By this I mean that The Messenger comes to give Oedipus good news but by means of his "spoken action", he brings about the opposite result. A 'Recognition' occurs simultaneously with the Reversal; this is a change from blissful ignorance to disgraceful knowledge8. This recognition and reversal leads to suffering, action that involves destruction and pain. The Messenger brings about the main action of the play as he tells Oedipus of his questionable descent and happily finds the man (Shepherd) who can confirm not only this fact but also seal Oedipus' fate as a man who has carried out unthinkable acts. The knowledge that The Messenger imparts instigates the horrific action that occurs in the later stages of the play (Jocasta's suicide, Oedipus' self blinding). He also confirms what horrific action has occurred before the time that the play is set. Without The Messenger's innocent information, we, and Oedipus, would not have had Tieresiras' impossible sounding prophecies confirmed. ...read more.