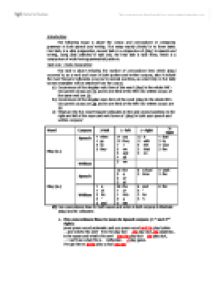 corpus and concordance in comparing grammar in both speech and writing

, the most commonly element followed playing is the preposition with, by 29 times, take for example; ... isn't it? What's Samantha? Words, she[['s]] playing with words. We're not are we? No, quite. There .... 1- ... that match they were lucky. Sunderland won, who were they [[playing]]? Sunderland won. Er Oxford I think. They were winning three ... who --> pronoun + were --> finite + they --> pronoun + playing --> v.ing who --> participant + they --> participant + playing --> process two clauses linked with subordination conjunction 'who', the first clause is independent, the second one is dependent. In written corpus, the word (playing) in the gerund form occurred in 104 concordance lines, preceded commonly by the finite was, 9 times, as the example shows; ... reinstated, and those who took the view that Clasper [[was]] playing power politics with their jobs at stake. The latter demanded ..., and mostly followed by the article the, 8 times, as such in; ... a barren beginning. To match their storming performances [[the]] actor playing the husband had to be forceful, too, and Peter Dayson ... The previous essay was about three main tasks, data preparation, comparison of play in speech and writing and comparison of wider lexicogrammatical patterns. Some of the main points encountered are; the position of a specific word determine whether the sentence is imperative, declarative or interrogative. Also the various meaning one word could have changes according to the position and the situation. When there is a subordination conjunction, the clause starts with it is always dependent. ...read more.