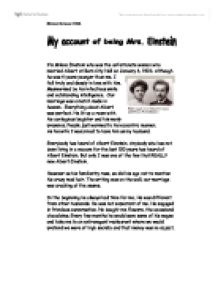 I'm Mileva Einstein who was the unfortunate woman who married Albert at Bern City Hall on January 6, 1903. Although he was 4 years younger than me, I fell truly and deeply in love with him. Mesmerised by his infectious smile and outstanding intelligence. Our marriage was a match made in heaven. Everything about Albert was perfect. He lit up a room with his contagious laughter and his manly presence. People just warmed to his eccentric manner. As his wife I was proud to have him as my husband. Everybody has heard of Albert Einstein. Anybody who has not been living in a vacuum for the last 100 years has heard of Albert Einstein. But only I was one of the few that REALLY new Albert Einstein. However as his familiarity rose, so did his ego not to mention his crazy mad hair. The writing was on the wall; our marriage was cracking at the seams. ...read more.

I was so excited about becoming a mother. For years I had watched others push their children around. I wanted that feeling of being a proper family. I knew I was going to be a great mother and that Albert was going to be a fantastic father. In 1905, Albert published his four scientific papers which were apparently a real breakthrough. This really kick started his career. On the surface things were great. Here I was with my perfect son and my incredibly intelligent husband. However nobody could see the catastrophic effect being married to a genius posed on myself and my marriage. Only a few years later Albert decided to resign from the University of Bern, to become an associate professor in Zurich. Due to this promotion I was forced to uproot my family and move to Prague. Away from everyone and everything I knew. But Albert was my husband, and if this was what made him happy I had no choice. ...read more.

My mind and body collapsed and I was hospitalised. Even after all he had put me through; he actually believed I was faking it. Nothing was real anymore. I couldn't cope with my life. I spent the next two years in a Swiss Psychiatric Clinic. When I finally recovered I decided to him his precious divorce. He could marry Elsa. I wanted him no longer in my life. I was angry and hurt but now was the time to move on. But I didn't let him off lightly. I demanded he signed over any future Nobel Prize as part of the divorce settlement. Well life had to go on as he would always say. Despite my sham marriage and the deep hurt and pain he put me through. I had my beautiful sons. Something Albert could never take away from me. We continued our life with out him. I got a nice little job teaching Maths and Music. So I was finally happy and so were my sons. Who did Albert Einstein think he was anyway? ?? ?? ?? ?? Shivani Kalwani 11SR ...read more.