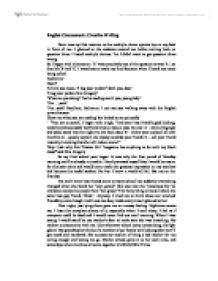 Creative Writing - Panic was my first reaction to the multiple choice options lay on my desk in front of me.

English Coursework: Creative Writing Panic was my first reaction to the multiple choice options lay on my desk in front of me. I glanced at the students around me before turning back to question three. I hated multiple choices. Yet I didn't want to get question three wrong. So I began with elimination. 'D 'was completely out of the question as was 'A ', so that left 'B 'and 'C'. I was about to make my final decision when I heard my name being called 'Catherine ' 'Huh?' 'I think you mean, "I beg your pardon" don't you, dear ' 'I beg your pardon Mrs. Gregory' 'What are you doing? You're reading aren't you, young lady ' 'Um ... yeah.' 'Um, yeah? Excellent, Catherine. I can see you walking away with the English prize this year. ' 'Show me what you are reading' she looked at me pointedly ' "You are at party", I began with a sigh, "'and your best friend's good looking, wealthy and successful boyfriend tries to make a pass. Do you: A - smile obligingly and steal; away into the night via the back door; B - throw your cocktail all over his shirt; C - quietly explain the loyalty towards your friend; D - tell your friend instantly, knowing that she will make a scene" ' 'May I ask why this "Cosmo Girl "magazine has anything to do with my Math class?" ...read more.

A year later. Watching rugby union is probably at the end of my list of things I' d like to do on a Sunday afternoon before exams, but my cousin was playing and I had promised to watch his grand final. Stupidly, I had taken my economics book with me thinking that I would get a few minutes of reading, but every time when someone scored, one of the hysterical people around me would hit me on the back and send my book flying. 'You'd do anything thing to beat me in the exam wouldn't you' I looked up in surprise at seeing Chad and moved over for him. That familiar voice makes my heart starts beating so fast that I'm afraid he would notice it. 'I just want it to be over. I want this year to be over, but another part of me is so petrified. God, Chad, we're never going to be at school again. At university we'll be nobodies.' I said. 'Just make sure your decisions and follow them through, Cath. that's what I've done. I've got my whole future planned out the way I want it to be and there is nothing anyone can do to take that away from me.' 'You're not going to follow in your father's footsteps?' I asked curiously. He grinned, shaking his head. "No way, Cath. My father lived his life his way. ...read more.

But he wasn't dead because people I know couldn't die. I couldn't keep it down anymore so I rushed to the toilet and threw up nothing in particular. I sank down on the ground closing my eyes and wanting to cry but I couldn't. I just felt so scared. I wrapped my arms around my knees for warmth and desperately wanting to go home. Instead I went to the homeroom and sat down to do my exams. At the funeral when eight boys who were all his close friends carried the coffin out of the church. I cried. It wasn't a physical burden on their shoulders; it was an emotional one. The pain and grief on their faces was indescribable. Sometimes an hour has gone by and I haven't thought of Chad. Sometimes two, but then I remember that not a minute will ever go by when his mother won't think of him. Sometimes I fell like I'm lost in this small world. One minute something happens in my life and I' m flying. Next minute I take a nose-dive and just as I'm about to hit the ground with full force something else will have me flying again. But the day Chad died was a nose-dive day and I hit the ground so hard that I feel as if every part of me hurts. I remembered how we talk about our future. The horror is that he had to die to achieve his but the beauty is that I'm living to achieve mine. ...read more.