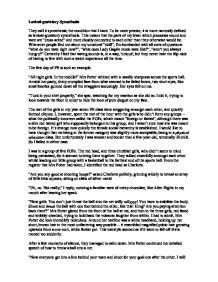 They call it synesthesia; the condition that I have. To be more precise, it is more narrowly defined as lexical-gustatory synesthesia. This means that the parts of my brain which processes sound and taste are “cross-wired” and more closely connected to each other than they otherwise would be. Whenever people find out about my unnatural “skill”, I'm bombarded with all sorts of questions: “what do you taste right now?”, “what does Lady Gaga's music taste like?”, “aren't you always hungry?” Certainly I feel that tasting sounds is, in a way, 'unique', but they never hear the flip-side of having to live with such a weird experience all the time.

The first day of PE is such an example.

“All right girls. In the middle!” Mrs Potter whined with a nasally sharpness across the sports hall. Amidst her pasty, shiny crumpled face from what seemed to be failed botox, two short eyes, like small beetles gunned down all the stragglers accusingly. Her eyes fell on me.

“Tuck in your shirt properly,” she spat, watching for my reaction as she did so. I did it, trying to look towards the floor in order to hide the look of pure disgust on my face.

The rest of the girls in my year seven PE class were sniggering amongst each other, and quickly formed cliques. I, however, spent the rest of the hour with the girls who didn’t form any groups – what the politically incorrect called the FOFs, which meant “foreign or fatties”, although there was a slim red haired girl who supposedly belonged to this group, and I wasn’t sure how she was meant to be foreign. It’s strange how quickly the female social hierarchy is established. I would like to have thought that me being in the former category was slightly more acceptable, being in a physical education class. But unfortunately I was weaker and bonier than a five-year-old, terminally ill child. So I failed in either case.

I was in a group of five FOFs. The red head, and three chubbier girls, who didn’t seem to mind being ostracized, for it seemed to bring them together. They talked cheerfully amongst each other whilst leading our little group with a basketball to the farthest end of the sports hall. From the register that Mrs Potter had taken, I identified the red head as Charlotte.

“Are you any good at shooting hoops?” asked Charlotte politely, grinning widely to reveal an array of little blue squares, sitting on slabs of silver metal.

“Uh, no. Not really,” I reply, noticing a familiar taste of minty chocolate, like After Eights in my mouth after hearing her speak.

“Now girls. You don’t just throw the ball into the net willy nillyyyy! You have to stabilize the body. Shoot and thrust the ball with one foot behind the other, like this! Hmg? Are you paying attention back there?” Mrs Potter glared from the front of the hall at me, and then to the three girls, red faced and wobbly-cheeked, trying to hold back the volcanic laughter from within. I had to admit, Mrs Potter did look incredibly ridiculous. Around her hairline was a white headband, holding up her short, brown hair in the most unflattering way possible – it resembled magnified pubic hair growing upwards from a one-inch, white flower pot. This hairstyle seemed as if it were to fall off if she moved too suddenly.

After a few moments of silence, they managed to calm down. Mrs Potter continued her detailed speech of how to throw a ball into a net.

“Now everyone get into a line behind your team and shoot for your goal one after the other. I will be coming round to correct your posture and technique. No dawdling, ladies! Chop chop!”

The room was filled with the sound of balls hitting the walls behind the nets. The rubbery bounce brought a dull taste of dried raisins to my tongue. Dashes of squeaking here and there from plimsolls making contact with the polished floor made me experience a sweet syrupy taste. The thin fog of feminine voices was like a background taste, similar to a soft, dry bread. Laughter and cheers from scoring a successful shot accentuated my palate and caused me to taste something a little sweeter and nearly crumbly. Listening to all the sounds combine, my mouth watered slightly as I thought I was savoring a raisin muffin.

“It’s your go,” Charlotte indicated, putting the basketball into my hands. The minty chocolate flavor interrupted my daydream.

I stood weakly with the ball in my hands and glanced up to the net. Suddenly a nasal tone echoes off the wall in front of me and hits me like a mudslide.

“Legs apart! Back straight! Move forward! You, yes I’m talking to you!” The twangy voice of Mrs Potter seeps into my head and swishes around in my skull similarly to when I’m on a jerky, rough bus-ride. I motioned forwards and tried to follow the instructions as fast as possible, but in my dizzy state, I found it difficult to stand up straight.

“What’s the matter with you, young lady? Can’t follow a simple instruction? How can you function in the world of sport when you can’t throw a ball into a net properly, hmg? Are you paying attention?”

Every question left a taste so vile in my mouth that even a few hours wouldn’t be enough time to think of a description of how badly this flavor was. Her voice had a very harsh tone, yet a hint of desperateness, as if demanding authority, but secretly understanding that she did not have full authority. The sounds rang bitter inside my mouth. Could I taste other people’s emotions aswell? I didn’t have time to contemplate. My tongue went flat against the bottom of my mouth and my face started to turn into an expression of constipation or pain, from the reaction of the girls around me.

The raisin muffin aroma dissipated and was replaced by a cold, acidic, pungent wave of slimy wetness which could have come from the deepest depths of the sewers, or from a five-year-unflushed-thick-mould-coated toilet that even Kim and Aggie would not bear to look at.

In one swift, involuntary movement, my hand grabbed Mrs Potter’s left shoulder, as she was the closest thing to lean on. The ball fell out of my other hand and bounced slowly on the floor – each bounce causing a tugging sensation at the contents of my stomach. My lips pressed together tighter, whilst my cheeks bloated at every heave. But I couldn’t hold it back, not the forthcoming rupture of lumpy orange puke that burst from my throat and onto Mrs Potter’s Daz-white tracksuit bottoms. After completely layering her from the waist-down for the third time with the dreadful fluid, I spat on the floor in an attempt to rid the taste from my mouth. Meanwhile, Mrs Potter jerked around, as if by moving fast enough, she could turn back time and avoid the messy accident. However, as she stumbled backwards, she jolted her head downwards to steal a look at the damage, only to find that her thick wig collapsed off from the top of her head, and tumbled down into the large puddle of vomit below.