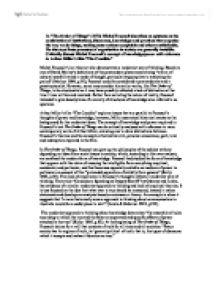 In "The Order of Things" (1973) Michel Foucault describes an episteme as the combination of institutions, discourses, knowledges and practices that organise the way we do things, making some actions acceptable and others unthinkable. He also says these processes of organisation in society are generally invisible. Critically discuss Michel Foucault's concept of knowledge/power with reference to Arthur Miller's film "The Crucible." Michel Foucault's is a theorist who demonstrates a modernist way of thinking. Based on one of David Morley's definitions of the postmodern phenomenon being "a form of cultural sensibility and a mode of thought, particularly appropriate to analyzing the period" (Morley: 1996, p.50), Foucault could be considered a postmodernist and a poststructuralist. However, some may consider his earlier works, like The Order of Things, to be structuralist as it may have possibly reflected a lack of distinction at the time it was written and received. Rather than narrating the nature of reality, Foucault intended to give descriptions of a variety of structures of knowledge also referred to as episteme. Arthur Miller's film "The Crucible" explores issues that are parallel to Foucault's thoughts of power and knowledge, however, Miller uses actual historical events as the background for his modernist ideas. The concept of knowledge and power explored in Foucault's text The Order of Things can be critically analysed with reference to more contemporary work of Arthur Miller, allowing one to draw distinctions between Foucault's theories and the concepts of collective evil, personal conscience, guilt, love and redemption explored in the film. ...read more.

In itself the exercise of power is not violence; nor is it a consent which implicitly is renewable" (Foucault: 1977, p.228). O'Farrell and Foucault's ideas are epitomized in the film 'The Crucible', when John Proctor refused to sign the confession or in this case refused power, he was set free even if it were to be through death. These power relationships were then abolished once the subject was freed and hence there was no possible point of reversal hence the film was forced to an abrupt end. Foucault also believes there is no suspicion that our language, our work, and our bodies might determine the description of our actions and our world in ways we do not realise and can't change. However, there are many reasons why this theory should be questioned, an example existing in the film "The Crucible". The young girls who were accused of witchery manifested power over their bodies and their language in order to convince the courts and an entire village of the existence of 'their world' and the fact they could see the devil. All this was done in a quest to cover up their actions that was dancing naked around a fire in the forest. This idea creates a contradiction to Foucault's theory. However, Foucault also says that our problem becomes "not the possibility of knowledge but the possibility of a primary misunderstanding" (Rajchman: 1985, p.113) which indeed was true in the case of the young girls of the film. ...read more.

In much of Foucault's writing there are seeming contradictions especially in this return to the traditional philosophic view or Enlightenment idea that description and interpretation ultimately must correspond to the way things really are. However, Foucault does admit to his somewhat unreal approach to writing. "I am fully aware that I have never written anything other than fiction. For all that, I would want to say that they were outside the truth. It seems plausible to me to make fictions work within truth, to introduce truth-effects within a fictional discourse..." With this is mind one can say that Foucault's writing is still informative and helpful in its own right and reveals more about society and its practices than about ultimate reality. In The Order of Things, Foucault does describe an episteme as the combination of institutions, discourses, knowledge and practices that organise the way we do things, making some actions acceptable rather than unthinkable. In many ways Foucault's concepts of knowledge and power are contradictory to his own existing theories. While many of Foucault's ideas are parallel with Arthur Miller's film, "The Crucible", some of his ideas reject Miller's way of thinking. This non-uniformity in Foucault's analysis can however be justified, because it is hard to believe that in any given culture and at any given moment, there is only one episteme that defines the possibility of all knowledge, power relations, the concepts of freedom and truth, whether it be in a theory or demonstrated in practice or action. ...read more.