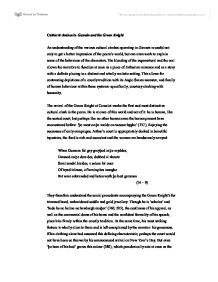 Cultural clashes in Gawain and the Green Knight.

Cultural clashes in Gawain and the Green Knight An understanding of the various cultural clashes operating in Gawain is useful not only to get a better impression of the poem's world, but can even work to explain some of the behaviour of the characters. The blending of the supernatural and the real allows the narrative to function at once as a piece of Arthurian romance and as a story with a definite placing in a distinct and wholly realistic setting. This allows for contrasting depictions of a courtly tradition with its Anglo Saxon ancestor, and finally of human behaviour within these systems: specifically, courtesy clashing with humanity. The arrival of the Green Knight at Camelot marks the first and most distinctive cultural clash in the poem. He is at once of this world and not of it: he is human, like the seated court, but perhaps like no other human even the heroes present have encountered before: '�e most on �e molde on mesure hyghe' (137). Enjoying the successes of early campaigns, Arthur's court is appropriately decked in beautiful tapestries, the food is rich and succulent and the women are handsomely arrayed: When Guenore ful gay gray�ed in �e myddes, Dressed on �e dere des, dubbed al aboute: Smal sendal bisides, a selure hir ouer Of tryed tolouse, of tars tapites innoghe �at were enbrawded and beten wyth �e best gemmes (74 - 9) ...read more.

To be ederly olden on Nw eres morn'), he pandered to their expectations of a courtly visitor. By so magnificently undermining these expectations, he has pointed out their reliance on such customs. The initial cultural clash, therefore, is of the most profound kind: reality coming up against an incomprehensible semi-reality. This clash between the real and the unreal or imaginary continues through the poem. The setting of the action blends the fantastical with the actual, thereby providing a degree of credibility to the scenes with the Green Knight. Hautdesert appears mystical, but Gawain's search for it has been rooted in a geographically specific landscape of the North-west and Wales. As Putter noticed (1996), the early apparition of Bertilak's castle carries much that the early listeners of the poem would have immediately recognised as staples of the medieval romance tradition (52). The hero's cry for help ('Cros Kryst me spede'), his subsequent vision of a castle and its superlative strength and beauty all have their precedents in northern European literatures, but the castle's placement in a location at once real and imaginary is a skilful technique of the poet's, as it displaces the reader slightly from how best to understand the text. If the interpretation of literature partly involves picking up on recognisable features in a text in order to gain an insight ...read more.

The clash, therefore, is one of natural humanity against the prescriptive commands of a social elite. At the second Beheading Scene, that Gawain flinches from the first blow is an indication, like his accepting of Morgan's girdle and not declaring this to Bertilak, of his internal opposition to defend himself as a man and to die without fear as a knight. It calls into question an issue overarching the poem: the tensions between an Anglo Saxon concept of loyalty and comitatus and a French understanding of chivalry and honour. To a certain extent these are interlinked: Gawain must remain faithful to Arthur as his liege, and a sense of honour binds him to his word. But Gawain's position as 'solitary hero,' which has its roots in the oldest European literatures, places him at odds with the later concepts of courtly unity as witnessed in Arthurian literature. Indeed, we remember that in Malory it was Lancelot's individuality that separated him from the rest of the Round Table and ultimately helped bring about its collapse. Perhaps the poet is therefore demonstrating the incompatibility of these two systems, forcing the two cultures together in Gawain and using the real-unreal setting of the text to prevent the reader, like Gawain, from understanding until the end of the story what the true test of the hero was. ...read more.