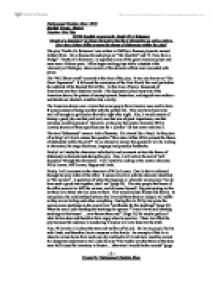 'Death of a Salesman' is about characters that lie to themselves as well as others. How does Arthur Miller present the theme of dishonesty within the play?

'Death of a Salesman' is about characters that lie to themselves as well as others. How does Arthur Miller present the theme of dishonesty within the play? The play 'Death of a Salesman' was written in 1949 by a famous playwrite named Arthur Miller. He is famous for such plays as "The Crucible" and "A View from a Bridge". 'Death of a Salesman', is regarded as one of the great American plays and even won a Pulitzer price. Miller began writing plays while a student at the University of Michigan, where several of his dramatic efforts were rewarded with prizes. The "Wall Street crash" occurred at this time of the play. It was also known as "The Great Depression". It followed the conclusion of the First World War and just before the outbreak of the Second World War. At this time of havoc, thousands of Americans saw their destinies vanish. The depression jolted many out of the American dream, the pattern of unemployment, frustration, and anguish was neither a worldwide nor identical condition but a reality. The American dream was a vision that some people from America were said to have. It would consist of being wealthy with the perfect life. This may have been to be well-off enough to get food on the table night after night. Also, it would consist of having a good job; one that paid well; one that was of great importance; one that everyone could be proud of. ...read more.

However, she could have said it so that it can appear as if it was a lie. Therefore the relationship between Willy and Linda may have had built on lies. After finding out how much money they actually owed it brings them to the truth. The reason for the lie could have been so that Willy can feel better about how his job had been progressing. The lie gives a false impression to the children so they may demand more things from their parents. The lie goes on all through the play and this lie about the job is reflected on a couple of times. The affect of this lie is that it goes on for the whole play. First of all Willy lies about his job to everyone he knows and then Linda lies to him about the real state of his job. They both lie to each other and everyone else on matters concerning the welfare of his job. Almost the whole of Act 1 depends on this lie. This lie, in my opinion does not come to a head. I think it carries on through out the whole play. The next character I will comment on is that of the character 'Happy' and how he has lied to everyone about not being content with his life. He makes out that he is happy about his life but really he is not. He would make out that he was very content with his life but in actual fact he is contempt with his life. ...read more.

These flash backs in a way build up some kind of tension. This flashback portrays the idea of dishonesty because he hasn't told anybody the truth about himself and thus proves that it is a lie. The flashbacks reveal the truth by showing the lies in the present. In conclusion, the moral of the play, in my opinion, is lying may ruin all of our lives. This is because when you tell one lie it leads to another and goes on for almost forever. One white lie is not good as it can also lead to other lies and so on and so forth. Lies can go to far as if someone thought that you were employed but really you weren't then they may ask you about it and in the end you have to tell them the truth. The moral of this story is portrayed through flashbacks monologue and motifs. The lies are the central of the play because the lies represent how we al can use them. These characters are just acting like we all do at certain times. Some of the lies come to a head because at once stage they have to be unfolded through the force of persuasion and things being spoken that you can't control. Also, the idea of reality versus the American dream was that people wanted to live the American dream and some were fortunate to do so. But, then the reality came into play and people were not happy at this. ?? ?? ?? ?? Muhammed Hashim Khan 10CS English Group: 10aEn1 Teacher: Mrs Pitts GCSE English coursework: Death Of A Salesman - 1 - Created by Muhammed Hashim Khan ...read more.