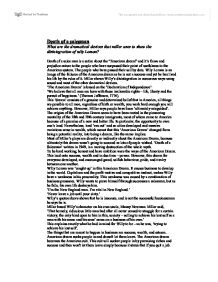 Death of a salesman - What are the dramatical devices that miller uses to show the disintegration of wily Loman?

Death of a salesman What are the dramatical devices that miller uses to show the disintegration of wily Loman? Death of a sales man is a satire about the "American dream" and it's flaws and prejudice nature to the people who have surpassed their point of usefulness to the American system. The people who have passed their sell by date. Wily Loman is an image of the failures of the American dream as he is not a success and yet he has lived his life by the rules of it. Miller shows Willy's disintegration in numerous ways using sound and most of the other dramatical devices. 'The American Dream' is based on the 'Declaration of Independence': 'We believe that all men are born with these inalienable rights - life, liberty and the pursuit of happiness.' (Thomas Jefferson, 1776). This 'dream' consists of a genuine and determined belief that in America, all things are possible to all men, regardless of birth or wealth; you work hard enough you will achieve anything. However, Miller says people have been 'ultimately misguided'. The origins of the American Dream seem to have been rooted in the pioneering mentality of the 18th and 19th century immigrants, most of whom came to America because of a promise of a new and better life. In particular, the opportunity to own one's land. Nevertheless, land 'ran out' and so cities developed and massive variations arose in wealth, which meant that this 'American Dream' changed from being a potential reality, into being a dream, like the name implies. Most of Miller's plays are directly or indirectly about the American Dream, because ultimately this dream wasn't going to succeed as lots of people wished. 'Death of a Salesman' written in 1949, is a moving destruction of the whole myth. To be hard working, honest and have ambition were the ways of the American Dream. ...read more.

Miller also makes the audience view his life as a totality. Conventions of time and place are not relevant for him. Miller does not divide his vision of reality into discrete unit. He conceives Will's mind as a place out of time, as a state in which all boundaries have been erased, in which all things are coexistent. This one of the ways that miller uses to show Willy's rapidly increasing decent to a total brake down. Miller makes Willy have internal inconsistencies that Willy displays shows the conflict inside of him. E.g. Willy says that his car is "the greatest car ever built", but later contradicts himself when he changes his opinion to "that goddamn Chevrolet. The things that are meant to happen in business are success, wealth, and esteem. This is what Ben has achieved and done. Miller stressed his success and material reward in Ben. He does this by Ben repeating himself a lot, ' I walked into the jungle, and when I came out I was rich.' Nevertheless, Ben also has emptiness in spite of his success. In the eyes of the audience, he has no real happiness. When Dave Singleman was mentioned, by Willy when he was trying to tell Howard what being a salesman used to be like, we only have Willy's evidence, as all we know, this man maybe maid up in Willy's head. But this man is a huge icon for Willy to look up to. 'He was eighty-four years old, and he'd drummed merchandise in thirty-one states'. Also Willy desperately wants a funeral similar to Dave's, 'When he died, hundreds of salesmen and buyers were at his funeral.' This was because Dave was greatly valued, whereas Willy isn't, nor is he loved as much. I think that this marks Willy's failure as a businessman. He hasn't realised the demands of the business world. Rather than the old way of Dave Signalman's time. ...read more.

However, this was not Arthur Miller's sole purpose in writing it. Willy's misjudgement of his failure in life is demonstrated in 'Death of a Salesman'. He feels as though he has failed because he has no fortune to show for it, in either his or his son's names. What he has truly failed in is his family life, and his married life. That is the corruption of the true 'American Dream' Willy lives closer to our experience than many protagonists, he is struggling with the pressures of twentieth century life: of money, of the city, of the family, of the job, while his weaknesses are those ordinary humans share. Loneliness, the inability to decide exactly what one wants, the breakdown of communications btw the two generations, are all part of our lives to some extent. Miller shows that man is isolated, and, even though he struggles, the may be faced with impossible odds. Does Miller make Willy a tragic hero? Yes * Miller argues that tragedy is not restricted to kings and queens * the common man is capable of heroism and tragedy * Miller's tragedy = The result of an individual's quest for personal dignity and occurs when an individual attempts to evaluate existence justly. * tragic flaw = an unwillingness to submit passively to the established order and values * in Willy's descent, there is a tragic paradox; for as he moves towards inevitable destruction, he acquires that knowledge, that sense of reconciliation, which allows him to conceive a redemptive plan for his house * Loman, the contemporary her embarks upon a most courageous Odyssey: the descent into the self, where he engages his most dangerous enemy, himself. No: * In the traditional sense, Willy is neither noble nor heroic * does not measure up to the stature of a great and good man * a small man, a mere failure who does not have the sufficient grace to warrant universal concern * doesn't have just one tragic flaw - he has many (disloyal, headstrong, short tempered, proud, false, etc) * common man is not of high stature ...read more.