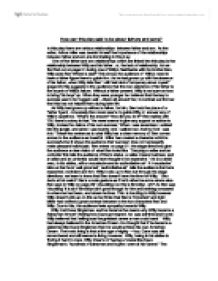 How can this play said to be about fathers and sons?

One of the father and son relationships which are linked into this play is the relationship between Willy and his father, or, the lack of relationship. As we first find out on page 31 during one of Willy’s flashbacks with his brother Ben, Willy asks Ben ‘Where is dad?’ This shows the audience of Willy’s need to have a father figure there to guide him. As he had grown up with the absence of his father, when Willy tells Ben ‘I still feel kind of temporary about myself’ (page 35) this suggests to the audience that the non-existence of his father is the source of Willy’s failure. Without a father present, Willy is not sure on how to bring ‘his boys’ up. When they were younger he believed that the key to success was to be ‘rugged, well – liked, all around’ but, in contrast we find out that this has not helped them during later life.

As Willy had grown up without a father, for him, Ben took the place of a ‘father figure’, conversely Ben never seems to guide Willy or answer any of Willy’s questions, ‘What’s the answer? How did you do it?’ Ben replies with ‘Oh, there’s a story in that.’ He never seems to give any support or advice to Willy, instead he claims of his own success; ‘When I was seventeen I walked into the jungle, and when I was twenty-one I walked out. And by God I was rich.’ These few sentences is what Willy has a clear memory of, Ben comes across to the audience as boastful. Miller has created a character which is successful but it shows the audience that ‘success’ does not necessarily make pleasant individuals. Ben enters on page 21; the stage directions give the audience a clear vision of what Ben looks like. ‘Carrying a valise and an umbrella’ this tells the audience of Ben’s status, a valise means business, and a valise and an umbrella would have thought to be expensive. ‘He is a stolid man, in his sixties, with a moustache and an authoritative air’ A ‘moustache’ tells us that he is ‘well groomed’, ‘authoritative air’ tells the audience that he is respected, confident and firm. Willy looks up to Ben but through the stage directions, we learn to know that Ben doesn’t have the time for Willy, ‘Ben looks at his watch’ this is a rude gesture as if he’d rather be some where else.  Ben says to Willy on page 29 ‘(chuckling) so this is Brooklyn, eh?’ As Ben was ‘chuckling’ it is as if Brooklyn isn’t good enough for him and nothing compared to where he had been, and where he lives. This is insulting to Willy however Willy doesn’t pick up on this as he thinks that Ben is ‘important’ and right. Miller had crafted a great contrast between to the two characters Ben and Willy. Due to this, the audience feels sympathy towards Willy.

Willy met Dave Singleman, and he became the reason why Willy became a Salesman himself. Seeing how Dave got respect, he was admired and loved; Willy believed that ‘selling was the greatest career a man could want.’ Willy had always believed in the American Dream. He thought that if he became a salesman like Dave Singleman then he would achieve his own American Dream. The ironic thing is that at the age of eighty – four, Dave was still remembered and still earned a living, however, Willy, being in his sixties is finding it hard to cope. Willy dreams of having a funeral like Dave Singleman’s, ‘hundreds of salesman and buyers were at his funeral.’ The

Irony is that no one turned up to Willys, as we found out in the requiem. This means that Willy has failed in achieving his ‘dream’.

Throughout the play we find out more about the relationship that Willy has with his two sons, Biff and Happy. As Biff was the first born, he has always been the most important son to Willy. This comes across the audience as so because whenever Happy tries to tell him something ‘I lost weight, pop, you notice? Willy disregards it and moves on to the next topic. As the ‘boys’ grew up, Willy gave them mixed messages. On page 17 when Willy found out that Biff stole the ‘regulation ball’ he firstly said ‘I want you to return that’ but then he contradicts himself and says ‘Coach’ll probably congratulate you on your initiative.’ As we find out Biff had been in jail (page 101) for stealing a suit, this could be in conjunction with how Willy never told Biff and Happy right from wrong. He believed that to succeed you had to be ‘well liked’ although we find out that this doesn’t lead Biff anywhere. Willy’s has always encouraged Biff with sport, the ebbets field game is what Willy believed to be the start of Biff’s success however it was the end as shortly after the crisis in the Boston hotel room occurred, and it was a huge turning point for Biff and Willy’s relationship. Ever since the day that Biff caught his father with ‘the woman’, Biff’s idolizing of his father ends. Before Biff saw the woman in the hotel room he is asking his father to talk to his maths tutor ‘Birnbaum’ in order to pass maths. This shows the audience how much faith he has in Willy at this point. All that is ruined when he see’s ‘the woman’ for the first time. She says ‘Where’s my stockings? You promised me stocking’s Willy!’ The stockings symbolize a sexual proposition and they would have been expensive, the scene is now at its dramatic climax as Willy now would feel guilt as Linda has to mend her stockings and he I spending money on ‘ the woman’. Biff is shocked and is ‘motionless’, he shouts at his father ‘You fake! You phoney little fake! You fake!’ This is harsh language that Biff uses, on the other hand all the trust and loyalty that Biff had for Will has now been destroyed and it is a huge turning point for Biff, therefore the audience can see why Biff reacted the way he did. This is the first time that we finally find out about what went wrong in their relationship. Miller creates a scene which is full of tension, especially because he left it so late on in the play for us to discover.

Howard Wagner and his family represent ‘success’ in this play. The ‘Wagner’ family seem to be the opposite of the ‘Loman’ family. Howard Wagner is the same age as Biff, and he reminds Willy of Biffs failure, and

Willy’s failure as a father. When Willy goes to see Howard in order for help, Howard is demeaning towards Willy he calls him ‘kid’. This is insulting towards Willy as Willy is older than Howard and you are meant to show respect to those who are older, in spite of this, the power has been reversed into Howard’s hands. Willy tries to sway Howard by telling him stories of his father. ‘Your father came to me the day you were born and asked me what I thought of the name of Howard.’ However Howard’s answer is still no. We are introduced to Howard’s children in this scene. Howard shows pride in his son naming the capitals of countries ‘The capital of Alabama is Montgomery; the capital of Arizona is Phoenix...’

This is using new technology, which Willy is clueless about; the ‘new technology’ could be a metaphor for Willy as Willy always seems to be taken over by new technology (i.e. fridge) just like the tape recorder kept interrupting him. Howard and his family are comfortable, on page 55 Howard says ‘…The maid kicked the plug out!’ This is a life which Willy dreams of as Linda has to ‘scrub the floors’ and ‘mend the stockings’.

Charley and Bernard are also a success, Bernard did well at school, unlike Biff and this becomes clear later on in the play. Willy calls Bernard ‘anaemic’ when all that Bernard tried to do was help Biff and warn him. Willy also insulted Charlie, he has seemed to be an ‘ignoramus’ even though he had been a good father to Bernard, also later on in the play Willy tells Charley ‘ ‘you’re the only friend I got.’ This means that he has realised that Charley wants to help him, however Willy had too much pride in order to accept the job offered by charley ‘I am offering you a job’. In contrast with Biff, Bernard has a clear view of life and what he wants to do. As Willy believes that in order to be a success, you have to be ‘well liked’, said on page 20 that ‘Bernard is not well liked, is he?’ He must have been unsure of the answer in order to have asked the question. Nonetheless Willy is wrong with his assumptions, as Bernard has done well in life and is a success. Willy meets Bernard in Charley’s office, he talked to Bernard about Biff and his failure, Willy is confronted with his fears, Bernard says that he changed when he came back from Boston; this is dramatic as we all know why, but Bernard doesn’t.

To conclude, the relationships between father and son are extremely important as they explore the cultural differences. Male dominance is seen throughout this play and it becomes clear that the job of the father is to show the son how to be a man, and in some cases, how to be a success.