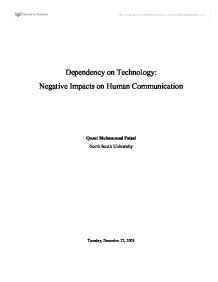 Dependency on Technology: Negative Impacts on Human Communication Quazi Mohammad Faisal North South University Tuesday, December 22, 2009 Abstract Technology has indeed made tremendous impact to society as well as on the quantity and manner by which we communicate with each other. The ease of communication may have been improved, but our lives have become more impersonal as a result. The research was focused on the area of technology's application on our lives and how it is affecting our interpersonal communication. The research was initiated in the belief that the abundant use of technology might be influencing the real human communication. The primary research was performed by questioning certain individuals regarding their usage of various technologies and how this made impressions on their lives. The findings showed that the increasing dependency on technology is actually hindering the interpersonal communication. Furthermore, the secondary research on the topic also provided various data and information that also suggests that this technology dependency is also creating impediments for the real human communication. The findings of both form of researches eventually confirms the hypothesis. Table of Contents Introduction 5 Background 8 Research Questions 12 Hypothesis 13 Research Methodology 14 Data Presentation and Analysis 15 Summary of Research Findings 26 Conclusion 27 Introduction Technology is the process by which humans modify the nature and their surroundings to meet their needs and wants. Most people, however, think of technology in terms of new stuff, like computers, cell phones, high performance cars, iPods, tall building long bridges, to name a few. But technology is more than these tangible products. According to Smallman (2007), "Technology is the evolution of an idea. It's the thinking of a man or woman who sees before them an opportunity to improve a process, or to create a device or object that facilitates, improves or aids something or someone else." In short, technology can be simply understood as the knowledge and use of tools to control and adapt to our environment. ...read more.

* What negative impact is being created on the development of the individuals as a social being due to the increased dependency on machines? * What do psychologists/sociologists say about this dependency on technology and its effect on human communication? Hypothesis Technology has brought remotes within our reach and has made our life easier. But just like the flip side of the coin, it has brought about some complexity as well. In my view, the ever increasing dependency on machines has actually a negative effect on our social life. As a social being, it is essential that we develop our inter-personal communication skill as we grow. But the current scenario with extensive use of technology is often not helping the cause. We have begun to think Google as our best friend and searching for a solution on whatever comes on our way. But we should remember Google has many things in its store but not everything. Ware still social being and we need to conduct real communication every once in a while. It's true that social communication takes more work and time, but it is vital in developing ourselves as individuals. It is also more beneficial, when dealing with a life crisis. I believe our ever increasing dependency on technology is actually hindering the human communication and has certainly creating obstacle as our development as a social being. Losing connections and getting too involved with technological outlets is dangerous. Research Methodology The research project "Dependency on technology is hindering interpersonal or human communication" is a requirement of the course Academic English - II. I chose this topic for the consideration that we are actually becoming tech freak and our social interaction is reducing with each day we pass. I aimed to draw a big picture of how people around us use various technological devices and how it impacts on their interactions. There were two stages of the research to gather data. ...read more.

This is the bond that forms family, relatives, friends, society, country and the world of human. But technology- what was supposed to be the savior of mankind is acting as a destructor of the very root of human, the social bond and communication. Considering all these facts and factors, my hypothesis of hampered human communication due to the dependency on technology actually proves to be true. Conclusion Many would argue that communication is at an all time high with the development of the many technologies that surround us. Cell phones, email, IMs, texting; all these things serve to enable us to contact anyone we choose at any moment of the night or day. And yet, families are more estranged from each other than ever. How can this be when the communication system is so advanced? Technology has given us much, there is no denying that. But it has also robbed us of some things that at one time were very precious and should still be today. There is merit in missing someone; in being far away and out of touch for a time. It makes that face to face time so much more special. There is much to say because it hasn't already been said fifteen times that day. There is joy in the little things shared. There is a sweet expectation when we have not heard the voice of that one that we love for awhile. There is an excitement to being together just for the mere fact of being apart. Going too far in one direction or the other isn't the way to go. Instead, let's use moderation. Let's keep the incredible technology that makes our lives so much easier and do away with technological practices which discourage human contact. As in all other relationships, we need to treat each other with respect and compassion. Avoidance of personal contact is neither respectful nor compassionate. Let's use technology wisely and stop using it to hide from each other or to increase profits at the expense of human beings. ...read more.