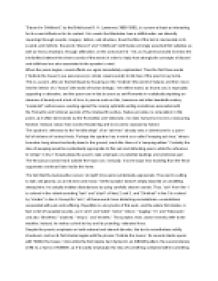 Discord in Childhood, by the British poet D. H. Lawrence (1885-1930), is a poem at least as interesting for its sound effects as for its content.

﻿?Discord in Childhood,? by the British poet D. H. Lawrence (1885-1930), is a poem at least as interesting for its sound effects as for its content. It is a work that illustrates how a skillful writer can intensify meanings through sounds, imagery, diction, and structure. Even the title of the text is memorable in its sounds and rhythms: the words ?Discord? and ?Childhood? both feature strongly accented first syllables as well as heavy emphasis, through alliteration, on the consonant ?d.? It is as if Lawrence wants to stress the similarities between the sheer sounds of the words in order to imply how strongly the concepts of discord and childhood are also associated in the speaker?s mind. When the poem begins, sound effects are again immediately emphasized. Thus the first three words (?Outside the house?) use assonance (or similar vowel sounds) to link two of the poem?s key terms. This is a poem, after all, that will begin by focusing on the ?Outside? (the world of nature) ...read more.

Thus, ?ash? from line 1 is echoed in the violent-sounding ?lash? and ?slash? of lines 2 and 3, and ?Shrieked? in line 3 is echoed by ?shrieks? in line 4. Except for ?ash,? all these words have disturbing connotations?connotations associated with pain and suffering. Repetition is a key tactic of this work, and the whole first stanza, in fact, is full of repeated sounds, as in ?and? and ?wind?; ?wind,? ?ship?s,? ?rigging,? ?in? and ?hideously?; and also ?Shrieked,? ?slashed,? ?ship?s,? and ?shrieks.? The speaker, then, doesn?t merely refer to the weather; instead, he makes us feel its fury and its pounding, reiterated force. Despite the poem?s emphasis on both external and internal disorder, the text is nevertheless solidly structured. Just as its first stanza begins with the phrase ?Outside the house,? its second stanza opens with ?Within the house.? And, while the first stanza had rhymed in an A/B/A/B pattern, the second stanza shifts to a rhyme of A/B/B/A, as if to subtly emphasize the idea of something contained within something else. ...read more.

Thus, when the poem returns in its final half line to ?the noise of the ash,? that latter noise now, somehow, seems relatively tame compared to the violence implied by the reference to a person being beaten until she bleeds. In some respects, then, the ?silence of blood? seems far worse than ?the noise of the ash.? The violence taking place within the house seems worse than anything going on outside. Particularly disturbing, however, is our realization that the speaker of the poem is probably the child of the parents whose arguments the second stanza describes. Probably too young to intervene either vocally or physically to stop the fighting, he has had to suffer the torture of listening to it?presumably more than once. The disorder he has had to endure has thus not only been the disorder of bad weather or the disorder of combative parents but also the deeper internal mental and emotional disorder caused by his parents? battles. Out of his memories of such disorder, however, he has produced a highly ordered, highly structured poem. ...read more.