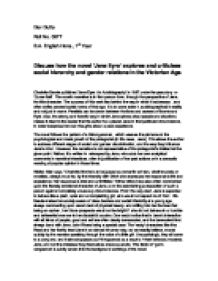 Discuss how the novel Jane Eyre explores and criticises social hierarchy and gender relations in the Victorian Age.

Dev Dutta Roll No. 0877 B.A. English Hons., 1st Year Discuss how the novel 'Jane Eyre' explores and criticises social hierarchy and gender relations in the Victorian Age. Charlotte Bronte published 'Jane Eyre: An Autobiography' in 1847 under the pseudonym 'Currer Bell'. The novel's narrative is in first-person form, through the perspective of Jane, the title character. The success of this work lies behind the way in which it addresses, and often defies several social norms of that age. It is to some extent, autobiographical in reality and not just in name. Parallels can be drawn between the lives and careers of Bronte and Eyre. Also, the strong and forceful way in which Jane opines about people and situations makes it clear to the reader that the author has placed Jane in that particular circumstance, in order toexpress her own thoughts about a past experience. The novel follows the pattern of a bildungsroman, which weaves the plot around the psychological and moral growth of the protagonist (in this case, Jane). This allows the author to address different stages of social and gender discrimination, and the way they influence Jane's mind. However, the narrative is not representative of the protagonist's intellect at the given point. ...read more.

This is done most notably with Blanche Ingram, Jane's nemesis as it were, and to some extent with the Reed children. At the very beginning we are fed an image of Jane as a bright, studious child, sitting and reading books while the Reed daughters spend their time frolicking. Similarly, Blanche is a talented woman, but her haughty and insensitive attitude towards Jane makes her a villain in the eyes of the narrator. Consequently, her actions are portrayed in a sour tone. She makes blasphemous and vulgar comments about Jane's occupation as a governess, "half of them detestable and the rest ridiculous, and all incubi".However, Blanche's superfluous elitism is directed at every person in her surroundings. It is Blanche's popularity and the envy she draws from her observers that Bronte points out here. It so happens that Mr. Rochester is the only one who remains unimpressed, (even though Blanche is most courteous towards him) perhaps due to his own unusual frankness. Bront�'s exploration of the complicated social position of governesses is perhaps the novel's most important treatment of the theme of social hierarchy. Jane is a figure of ambiguous class standing and, consequently, a source of extreme tension for the characters around her. Jane's manners, sophistication, and education are those of an aristocrat, because Victorian governesses, who tutored children in etiquette as well as academics, were expected to possess the "culture" of the aristocracy. ...read more.

St.John wanted Jane to marry him and go to India, not because he loved her, but because he thought she would make a good missionary partner. However Jane rejects St.John Rivers. She also does not acceptBrocklehurst's hypocritical views about how orphan children needed to submit to a harsh life, because they were being punished for their past sins. Jane articulates her idea of feminism thus, "Women are supposed to be very calm generally: but women feel just as men feel; they need exercise for their faculties, and a field for their efforts as much as their brothers do..... It is thoughtless to condemn them, or laugh at them, if they seek to do more or learn more than custom has pronounced necessary for their sex."Mr. Rochester is perhaps the only man who seeks to keep Jane to himself out of love and not chauvinism ormistaken idealism. Even though Rochester's demands of Jane are lustful and immoral, in light of his marriage to Bertha, one cannot help but sympathise with him and his cruel fate. The storyline, or rather Bronte, delivers a final blow to Rochester in the form of his accident and consequent blindness. Then, in the distinct manner of evening the scales, Jane goes back to him after a supernatural calling, this time as his equal (or somewhat superior considering Rochester's handicap, in the view of some critics). ...read more.