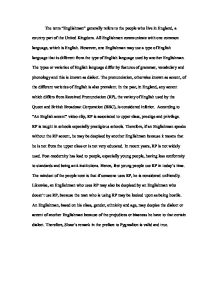 Discuss &quot;It is impossible for an Englishman to open his mouth without making some other Englishman despise him.&quot;

The term "Englishman" generally refers to the people who live in England, a country part of the United Kingdom. All Englishmen communicate with one common language, which is English. However, one Englishman may use a type of English language that is different from the type of English language used by another Englishman. The types or varieties of English language differ by features of grammar, vocabulary and phonology and this is known as dialect. The pronunciation, otherwise known as accent, of the different varieties of English is also prevalent. In the past, in England, any accent which differs from Received Pronunciation (RP), the variety of English used by the Queen and British Broadcast Corporation (BBC), is considered inferior. According to "An English accent" video clip, RP is associated to upper class, prestige and privilege. RP is taught in schools especially prestigious schools. Therefore, if an Englishman speaks without the RP accent, he may be despised by another Englishman because it means that he is not from the upper class or is not very educated. In recent years, RP is not widely used. Post-modernity has lead to people, especially young people, having less conformity to standards and being anti-institutions. Hence, few young people use RP in today's time. ...read more.

The category of social class is said to be rather broad and vague because it includes a range of different people. Labov's New York City findings also suggest that it was the lower-middle-class women who were the main influence of the /r/ pronunciation in their community. Labov (1968) argued that these women were particularly conscious of the prestige value of /r/ and that they worked hardest to assimilate upper-middle-class speech. Trudgill (1983) highlighted that the single most consistent finding to emerge from sociolinguistic work in the past two decades is that in every social class, men use more non-standard forms than women. It has been suggested that men use more non standard forms as it presented a more masculine, tough and rebellious image. Women tend to conform more to social norms and model acceptable behavior and are more status conscious than men (Graddol, Leith, Swann, Rhys & Gillen). Women probably want to belong into the upper class so that they may marry to a man of the upper class and live in luxury instead of being in the lower class group and despised by others for all her life. Therefore, they conform more to the acceptable dialect and accent of the upper class group. ...read more.

It is due to the pressure to conform to their peers and a new dialect has formed altogether. Older people have fewer tendencies to change their dialect or accent and this may be because they do not want to lose their national identity. Therefore, in the Milton Keynes context, an elderly person from Buckinghamshire, may despise a teenager whose parents came from Buckinghamshire because the teenager is speaking in a new dialect and accent and to this elderly person, the teenager has loses his Buckinghamshire identity. There are simply too many dialects in England herself since each town seems to have their own distinct dialect. People associate certain dialect and accent like the RP to prestige and power. Women have more tendencies to conform to the language of prestige while adolescents do not like to conform to the accepted dialect and make changes to it. Certain ethnic language may be threatened by Standard English since Standard English is the language most sought after. In conclusion, I have proven Shaw's statement, "It is impossible for an Englishman to open his mouth without making some other Englishman despise him." to be true and valid because there are many dialects and accents in England and some people, based on their class, gender, ethnicity and age, may have prejudices and biasness to a certain dialect and accent. ...read more.