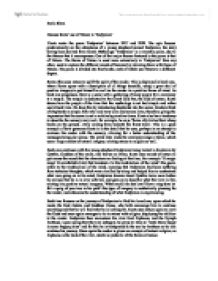 Discuss Keats' use of Nature in 'Endymion'.

Discuss Keats' use of Nature in 'Endymion' Keats wrote the poem 'Endymion' between 1817 and 1818. The epic focuses predominantly on the adventures of a young shepherd named Endymion, the story having been derived from Greek Mythology. 'Endymion' is a romantic poem, due to the themes that it encompasses. One of the major themes featured in the poem is that of Nature. The theme of Nature is used more extensively in 'Endymion' than any other, used to capture the different moods of humans by mirroring them with those of Nature. The poem is divided into four books, each of which use Nature to a different degree. Keats often uses nature to uplift the spirit of the reader. This is displayed in book one, where Keats opens with a description of all things beautiful, using a great deal of positive imagery to put himself as well as the reader in a positive frame of mind. As book one progresses, there is a scene with a gathering of many people for a ceremony at a temple. ...read more.

Endymion dreams about Cynthia twice more before he realises that he is in love with her, and goes on to describe what that love is like, relating it to positive natural imagery; 'What could it be but love? How a ring dove let fall a sprig of yew tree in his path' this type of imagery is aesthetically pleasing for the reader, and enhances the understanding of what Endymion is experiencing. Book two focuses on the journey of Endymion to find his loved one, upon which he meets the God Adonis and Goddess Venus, who both encourage him to continue searching and that he will find what he is looking for. Keats uses nature again to exalt the Gods and once again manages to tie in nature with religion, displaying his abilities to the reader. Endymion then encounters the river God Alphaeus, and the Nymph Arethusa. Upon seeing that they are unhappy, he prays to Dian to 'make them happy in some happy plains' and for this he is transported to the sea by Arethusa so he can continue his journey. ...read more.

The song features Nature which helps to convey the various emotions displayed by the Indian Maid. After hearing her song, Endymion despairs and wishes to die, using nature to show his feelings. For example, he says 'Night will strew on the damp grass with lingering leaves, and with them shall I die'. Keats is comparing death in nature to Endymion's wish to die, in order to give the reader a better understanding of his despair. Endymion is met with his sister, and he tells her of his despair, and at that moment his beloved Cynthia appeared before him and told him that his journey was over. The story ends with Endymion disappearing with Cynthia, having reached the highest level of happiness. To conclude, the theme of Nature is one that eclipses all others as the main element of the romantic epic 'Endymion'. It is useful in revealing human moods and feelings, setting the scenery to give readers a richer understanding of the story, and emphasising religion and exalting individuals and their qualities. Without the theme of nature, 'Endymion' may not have been the renowned classic that it is today. Emile Khan ...read more.