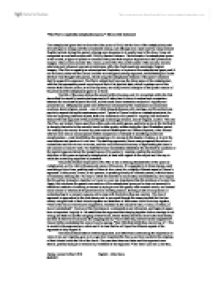 "The Flea is a typically metaphysical poem." Discuss this statement The metaphysical genre derives from the older poem of Ovid, but the form of the metaphysical poets did not begin to emerge until the seventeenth century, and although was a style used by many eminent English lyricists during this period, infusing new dynamism in to poetic trend of the time, it was not recognised as a collective style until 1744, by Samuel Johnson. The hallmark of a metaphysical poem is the conceit, a figure of speech or element of the poem that employs atypical and often paradoxical imagery. Many would consider John Donne, poet of The Flea, as the master of the conceit, cleverly entwining well rehearsed persuasive techniques with often flamboyant and seemingly illogical imagery. The Flea is arguably an almost perfect illustration of a poem of the metaphysical genre, and it can be clearly observed that Donne includes an intelligently strong argument, demonstrating his innate ability to fuse thought with passion, whilst using the metaphysical features of the poem's structure itself to support his argument. The Flea's subject itself conveys the literal sense of the metaphysical, with the flea representing much more beyond that of its physical state, which is perhaps one of the reasons that Donne's poems, as will be explored, are such powerful examples of the poetic manner of his period and the metaphysical genre as a whole. ...read more.

It can suddenly be seen much more clearly how paradoxical this argument is, and yet how subtly and cleverly it can be constructed and subsequently conveyed through the subject of a meagre flea who has bitten both partners. The pace becomes slower once more, and completes the circular argument of the poem - the flea began as nothing, and now it has been killed so easily by the woman, ends as nothing too. A further typically metaphysical trait used by Donne in this poem is the contradicting argument he ends with. The argument he ends with does not understate the value of virginity, nor exclaim how important the flea way, instead he now articulates that in killing the flea, nothing bad has happened. Having previously argued that killing the flea would be, "sacrilege, three sinnes in killing three", Donne then says that the fears were unfounded, and that the woman's fears about sleeping with Donne's persona before marriage would be unfounded and irrational too. The three stanzas convey Donne's point from every angle, which is perhaps a way of ensuring that his argument is watertight and can stand up to any opposition from the woman. As well as the structure of the poem's argument being typically metaphysical, it is also no less intricately designed than the general internal structure, including the rhyme scheme and ...read more.

The exaggerated language is used to try and support the poem's argument and encourage the submission of the woman, which, because of the metaphysical genre, seems to be an often obscure and in places seemingly illogical argument. In conclusion, it is thus very clear that John Donne's The Flea poem is typically metaphysical, by embodying quintessential characteristics of the genre throughout the poem. As well as the conceit within the poem, and the metaphysical manipulation of the poem's structure and form, the poem is also one of immense innuendo. In keeping with metaphysical conventions, although there are constant hints towards the erotic, the poem does not have any explicit reference to it, highlighting the subtlety of the argument he portrays, which is cleverly hidden but delivered through use of a very unusual and absurd object which in this case is the physical existence of the flea itself. The poem is successful as a typical poem of the metaphysical poetic movement, as it utilises every element of the poem, including its structure and language, to exhibit the archetypal attributes of absurd imagery and witty, intelligent and yet subtle arguments to convey the passionate argument of John Donne. Ashley Louise Coffey 12CR English - Miss Barry 08/02/07 ...read more.