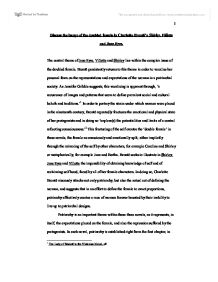 Discuss the image of the doubled female in Charlotte Bront's Shirley, Villette and Jane Eyre.

Discuss the image of the doubled female in Charlotte Bront�'s Shirley, Villette and Jane Eyre. The central theme of Jane Eyre, Villette and Shirley lies within the complex issue of the doubled female. Bront� persistently returns to this theme in order to vocalise her personal fears on the representations and expectations of the woman in a patriarchal society. As Jennifer Gribble suggests, this vocalising is apparent through, 'a recurrence of images and patterns that seem to define prevalent social and cultural beliefs and traditions.'1 In order to portray the strain under which women were placed in the nineteenth century, Bront� repeatedly fractures the emotional and physical state of her protagonists and in doing so 'explore(s) the potentialities and limits of a central reflecting consciousness.'2 This fracturing of the self creates the 'double female' in these novels, the female as consciously and emotionally split, either implicitly through the mirroring of the self by other characters, for example Caroline and Shirley or metaphorically, for example Jane and Bertha. Bront� seeks to illustrate in Shirley, Jane Eyre and Villette the impossibility of obtaining knowledge of self and of reclaiming self hood, faced by all of her female characters. In doing so, Charlotte Bront� viscously attacks not only patriarchy, but also the actual act of defining the woman, and suggests that in an effort to define the female to exact proportions, patriarchy effectively creates a race of women forever haunted by their inability to live up to patriarchal designs. Patriarchy is an important theme within these three novels, as it represents, in itself, the expectations placed on the female, and also the repression suffered by the protagonists. In each novel, patriarchy is established right from the first chapter, in order to render the reader aware of the establishments that the protagonists seek to defy. Shirley, for example, beautifully parodies the curates at their meal, literally devouring everything that the housekeeper brings them. ...read more.

It seems that Bront� was greatly concerned about the effects of suppressing the woman, it can only be maintained so long, she suggests, before the repressed consciousness splits, break s down and becomes tormented. 'Indeed there was no way to keep well under the circumstances,'28 says Lucy when she is left alone to wrestle her own thoughts during the long vacation. This phrase of Lucy's, it seems, epitomises the impossibility of maintaining wholeness of consciousness for all of the protagonists. Jane is so closely, repeatedly, connected with the character of Bertha Rochester. Bertha embodies the sexual, wanton aspect of Jane's needy personality. Jane not only needs to be freed from the confines of her governess position, but also literally depends upon its destruction in order to save her life. It is only when Jane is in the presence of Bertha, in the direct vicinity of her 'darkest twin,' the woman who actively lives the hidden aspects of Jane's desires that Jane is able to break out of her governess cocoon. Jane acknowledges the existence of a strange woman in the house, whom she thinks is Grace Poole. However, Jane's persistent need to seek out Grace Poole, her desire to see her and speak to her, is simply Bront�'s using the image of the search for a madwoman as a metaphor for Jane's own inner madness. Simply put, Jane is Bertha Rochester, Jane is her own mad woman, and wholeness of self is only achieved when Jane acknowledges this: [D]o you think I can stay to become nothing to you?' Shouts Jane to Rochester. 'Do you think I am an automaton?-a machine without feelings? and can bear to have my morsel of bread snatched from my lips, and my drop of living water dashed from my cup? Do you think because I am poor, obscure, plain, and little, I am soulless and heartless?'29 Ironically, Jane acknowledges herself half way through the novel, but she uses this acknowledgement as both ammunition and defence. ...read more.