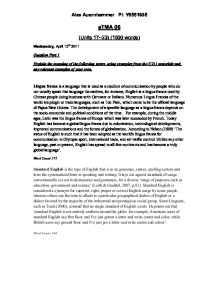 Discuss the implications of the global spread of English for the learning and teaching of the language.

eTMA 06 (Units 17-23) (1500 words) Wednesday, April 13th 2011 Question Part 1 Explain the meaning of the following terms, using examples from the U211 materials and any relevant examples of your own. Lingua franca is a language that is used as a medium of communication by people who do not usually speak that language themselves, for instance, English is a lingua franca used by Chinese people doing business with Germans or Italians. Numerous Lingua Francas of the world are pidgin or trade languages, such as Tok Pisin, which came to be the official language of Papua New Guinea. The development of a specific language as a lingua franca depends on the socio-economic and political conditions of the time. For example, during the middle ages, Latin was the lingua franca of Europe which was later succeeded by French. Today English has become a global lingua franca due to colonization, technological developments, improved communications and the forces of globalization. According to Nelson (1999) 'The status of English is such that it has been adopted as the world's lingua franca for communication in Olympic sport, international trade, and air-traffic control. ...read more.

The second kind of 'learning situation' Crystal (2002) highlights is that in which English is learned as a 'foreign language' in countries where it does not enjoy any official status. Here he identifies the one principal motivating factor which is causing state institutions and individuals across the globe to invest their time and money in the teaching and learning of English. It is the status English enjoys as the global lingua franca which is fueling the increase in interest in the language: the more useful English is seen to be, the more people will see the need to use it (Crystal, 2002). For instance, in Morocco 'French remains the predominant foreign language taught in schools...but a reading knowledge of English has become increasingly important at university level'. (Bourne, 2007) The increase in English use among non-native speakers has had and will almost evidently continue to have consequences. The most substantial linguistic consequence of the spread of English in these areas, however, has been the emergence of new varieties such as Indian English and Nigerian English. The cause for this might be that local teachers are more used to the local varieties of English and teaching Standard English might be difficult for them and employing native English speakers from UK or USA is expensive. ...read more.

The reaction of individual citizens to the growth of English use will probably be based on their own subjective criteria. Those who can speak English and benefit from its use will probably view the language positively. Those who cannot may take a negative view and even express hostility towards English users. An issue in relation to the global spread of English in education is that some educationalists find evidence to support the view that learning at primary and secondary levels in languages that students have a poor command of. So, English-medium teaching might sound a good idea but could actually leave some at a disadvantage. What do the studies show about this? In this essay it was highlighted how English is being used increasingly by non-native speakers for numerous reasons. Where it is used as a "second" language, it enjoys a "special status", having been selected as an "official" language. These countries are also influenced by the role of English as the global lingua franca, the principal motivating factor behind the spread of English as a "foreign language". It was then shown how such an increase in the use of English affects both the English language and the languages with which it comes into contact, how it provokes different socio-political reactions according to different contexts and entails economic consequences. ...read more.