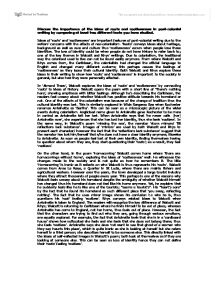 Discuss the importance of the ideas of roots and rootlessness in post-colonial writing by comparing at least two different texts you have studied.

Discuss the importance of the ideas of roots and rootlessness in post-colonial writing by comparing at least two different texts you have studied. Ideas of 'roots' and 'rootlessness' are important features of post-colonial writing due to the writers' concerns with the effects of neo-colonialism. 'Roots' conveys ideas about heritage, background as well as race and culture thus 'rootlessness' occurs when people lose these identities. The loss of identity could be when people do not have history to refer back to; one of the key themes in Walcott and Rhys' writings. Due to colonialism, the traditional way the colonised used to live can not be found easily anymore. From where Walcott and Rhys comes from, the Caribbean, the colonialists had changed the official language to English and changed many different customs; this perhaps causes the feelings of 'rootlessness' as they loose their cultural identity. Both Walcott and Rhys explore these ideas in their writing to show how 'roots' and 'rootlessness' is important to the society in general, but also how they were personally affected. In 'Almond Trees', Walcott explores the ideas of 'roots' and 'rootlessness' by connecting 'roots' to ideas of history. Walcott opens the poem with a short line of 'There's nothing here', showing emptiness with bitter feelings. ...read more.

Antoinette says she does 'not want to see that ghost of a woman who they say haunts this place', which is quite ironic as she is looking at herself but she refers herself in a third person; she describes herself to be someone else. This directly linked with the ideas of self-reflected images in Walcott's poem; both look at themselves as if they are looking at someone else. This can be seen as loss of identity hence they can not define their 'roots' feeling 'rootless'. Furthermore, this leads into questioning ideas about the changed homeland thus their identity has been affected. Walcott introduces ideas of history with 'twisted, coppery, sea-almond trees'; this brings in the existence of the 'sea-almond trees' which had been there since the Caribbean was discovered by the colonialist. However, the augmented images of 'twisted, coppery' suggest the ages of the tress and the length of the tree's existence. Conversely, it could also mean that people are not respecting the traditional values thus it is becoming demented. The on the beach, there are 'forked limbs of girls toasting their flesh' suggest the ideas of the tourists disgracing the long-established principles of the Caribbean. ...read more.

This is particularly visible when Antoinette claims that she "will be a different person when [she] lives in England and different things will happen to [her]". Due to her loss of identity, she feels 'rootless' as a result she feels that the only way to get her identity back to by moving away from home. However, this is highly ironic as later when she moves to England, she becomes the 'mad woman in the attic'; she does change. However, the readers witness that Bertha has completely different characteristics to Antoinette and perhaps through losing her identity, this is how she became to feel 'rootless' thus changes into Bertha. Both writers see the importance of the ideas of roots and rootlessness, seen especially through their own personal attributes towards these concerns. Both writers' personal background of them being multicultural adds to the fact that they are more personally engaged with the concerns in their writing; both writers expresses anger towards the loss of identity leading into 'rootlessness'. However, Walcott presents ideas of 'roots' and 'rootlessness' on the changes made to his homeland so when he comes back, he does not feel at home, whereas Rhys conveys feelings of 'rootlessness' by putting the characters in a foreign environment where dominance and oppression takes away their identity leading the characters to feel 'rootless'. ...read more.