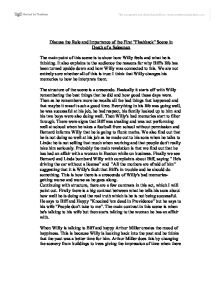 Discuss the Role and Importance of the First &quot;Flashback&quot; Scene in Death of a Salesman.

Discuss the Role and Importance of the First "Flashback" Scene in Death of a Salesman The main point of this scene is to show how Willy feels and what he is thinking. It also explains to the audience the reasons for why Biff's life has been turned upside down and how Willy was connected to this. We are not entirely sure whether all of this is true: I think that Willy changes his memories to how he interprets them. The structure of the scene is a crescendo. Basically it starts off with Willy remembering the best things that he did and how good those days were. Then as he remembers more he recalls all the bad things that happened and that maybe it wasn't such a good time. Everything in his life was going well, he was successful at his job, he had respect, his family looked up to him and his two boys were also doing well. Then Willy's bad memories start to filter through. There were signs that Biff was stealing and was not performing well at school when he takes a football from school without permission and Bernard informs Willy that he is going to flunk maths. ...read more.

in the past. Also we hear a solo flute being played which connects him to the memory of his father whom played the flute. This also suggests a happier feeling on the part of Willy. Arthur Miller also makes the lights brighter making the act not seem normal and therefore what Willy is thinking. Brightness is connected with happiness, which also sets the tone for this scene. What Willy tells his sons is harmful because he lives in an unrealistic, fantasy world. He tells them that personality is important and that you don't have to work hard to get far. He makes himself seem successful and well liked but he later tells Linda that this is not true. This theory is very much wrong because all the hardworking people who Willy claims are not well liked are doing better in life than he is for example his brother Charlie. This is partly why his sons fail in life because they believed that life was easy and they didn't have to work hard- when they did try to do anything, they overestimated themselves and didn't succeed. ...read more.

I think this provokes sympathy for Willy from the audience because Willy knows he's done an extremely bad thing and is very sorry about it but he can't get out of the back of his mind. The end of this scene is the climax of the crescendo of Willy's guilt. It started with Willy liking the past when he was successful and his kids had a good future but as he remembers all of the bad things they all pile up and he 'explodes' saying "There's nothing the matter with him!" Willy realizes at the end that it was a really bad time and that things weren't as good as they seemed. Conclusion Arthur Miller doesn't just use the flashback as one of Willy's memories but to show Willy's state of mind and that he liked the past better than the present but finds cracks when recalling some of it. It also explains why the present is the way it is because Willy sometimes misled them. The structure helps us to understand it because it shows us how Willy's shame escalated when he realizes all the bad things he did. ...read more.