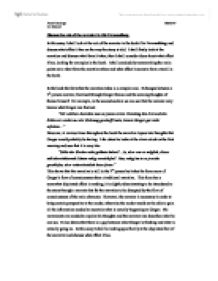 Discuss the role of the narrator in Die Verwandlung.

Discuss the role of the narrator in Die Verwandlung. In this essay I shall look at the role of the narrator in the book Die Verwandtlung and discuss what effect it has on the way the story is told. I shall firstly look at the narration and discuss what form it takes, then I shall consider ideas about what effect it has, looking for examples in the book. I shall conclude by summarising the main points as to what form the narration takes and what effect it seems to have overall in the book. In the book the form that the narration takes is a complex one. It changes between a 3rd person narrator, focalised through Gregor Samsa and the seeming thoughts of Samsa himself. For example, in the second section we can see that the narrator only knows what Gregor can find out: "Mit welchen Ausreden man an jenem ersten Vormittag den Arzt und den Schlosser wieder aus der Wohnung geschafft hatte, konnte Gregor gar nicht erfahren..." However, at various times throughout the book the narrative lapses into thoughts that Gregor would probably be having. Like when he looks at the alarm clock on the first morning and sees that it is very late: "Sollte der Wecker nicht gel�utet haben?...Ja, aber war es m�glich, dieses m�belersch�tternde L�uten ruhig verschlafen? ...read more.

and Mrs. Samsa, if the narrative suddenly lacked Gregor's consciousness then it would be a message that it should not have been a relief that the family were rid of him, but instead the narrative continues. This unease is reinforced by the situation faced in the story, the blending of the real and the surreal - the normal family and situation and Gregor's transformation. The gap between the two kinds of narrative gives scope for some humour. For example the first morning, when his boss from work is coercing him out of his room. On the one hand, his boss is telling him he is a useless lay about and no use to the company and Gregor is worrying about being fired for being late. But on the other hand the reader knows the fact that Gregor has turned into an insect and has much greater difficulties to deal with than even he himself seems to have considered. He unsuccessfully trying to get out of bed when his thoughts are actually on having to get up early for work illustrates this: "Er glitt wieder in seine fr�here Lage zur�ck. ...read more.

this question strikes the reader as it not only shows that Gregor still seems to have what would be considered a very human trait of being moved by music, but he is also still reasoning like a human being. In conclusion, the narrative in Die Verwandtlung has a disjointed style, swapping between the two styles of normal narrative focalised through Gregor and the narrative that describes Gregor's thoughts to the reader. This style creates unease throughout the story that is reflected by the questions posed by the story, over Gregor's humanity, and the juxtaposing of the real family and surreal transformation in the story. The gap of information given by the two styles of narrative give opportunity for humour, but the humour is also ambivalent, like the narrative, one does not know if it truly is humour this increases the reader's unease. The narrative also tracks the passage of time and makes the reader feel that Gregor was still human to the last. All of these aspects of the narrative combine to give the feeling that the reader cannot be sure of any moral stand-point in the story and is not able to come to complete conclusions - this means the reader is left with questions rather than answers and must therefore involve themselves in the story more. ...read more.