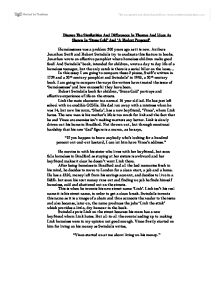 Discuss The Similarities And Differences In Themes And Ideas As Shown In 'Stone Cold' And 'A Modest Proposal'.

Discuss The Similarities And Differences In Themes And Ideas As Shown In 'Stone Cold' And 'A Modest Proposal' Homelessness was a problem 200 years ago as it is now. Authors Jonathan Swift and Robert Swindells try to eradicate this feature in books. Jonathan wrote an effective pamphlet where homeless children make good food! And Swindells' book, intended for children, wrote a day to day life of a homeless teenager, but the only catch is there is a serial killer on the loose... In this essay I am going to compare these 2 pieces, Swift's written in 1729 and a 20th century pamphlet and Swindells' in 1993, a 20th century book. I am going to compare the ways the writers have treated the issue of 'homelessness' and how successful they have been. Robert Swindells book for children, 'Stone Cold' portrays and effective experience of life on the streets. Link the main character is a normal 16 year old lad. He has just left school with no credible GCSEs. His dad ran away with a mistress when he was 14, but now his mum, 'Sheila', has a new boyfriend, 'Vince', whom Link hates. The new man is his mother's life is too much for link and the fact that he and Vince are enemies isn't making matters any better. Link is slowly driven out his home in Bradford. ...read more.

His constant reference to words for the homeless, 'blighters', 'dossers', 'junkies' makes him a much more credible and fun character than Link. Most of his speech patterns (sentence structure) are short, clipped sentences' Swindells main aim in Link is to make the reader appreciate their life. He tries to make the reader understand and empathy the issue of homelessness and at times through the character of Link does this extremely well. But Swindells main aim in Shelter is to produce the plot in the novel and to make it exciting. He does this successfully and at most times Shelter is a more powerful character than Link. Shelter's aim is to ridicule the homeless from the streets of London whereas Link happens to be on the streets of London because of small problems at home. Shelter is a more credible character and that is why the book looks more like a 'thriller' where a serial killer on the loose. A Modest Proposal was written in 1729 by Jonathan Swift. Swift was born in Dublin 1667. At the age of 27 he became a clergyman. A modest Proposal was written as a pamphlet. In the pamphlet Swift tries to argue the points made in A Modest Proposal through logic and reasoning to raise the issue of homelessness. The arguments made in A Modest Proposal are: He argues that children would provide excellent food for the people of Britain as he writes, "A young healthy child well nursed is at a year old a most delicious, nourishing and wholesome food whether stewed, roasted or boiled." ...read more.