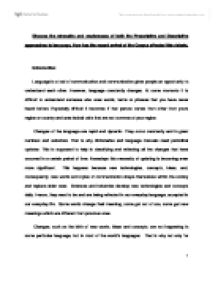 Discuss the strengths and weaknesses of both the Prescriptive and Descriptive approaches to language. How has the recent arrival of the Corpus affected this debate.

Discuss the strengths and weaknesses of both the Prescriptive and Descriptive approaches to language. How has the recent arrival of the Corpus affected this debate. Introduction Language is a tool of communication and communication gives people an opportunity to understand each other. However, language constantly changes. At some moments it is difficult to understand someone who uses words, terms or phrases that you have never heard before. Especially difficult it becomes if that person comes from other from yours region or country and uses lexical units that are not common at your region. Changes of the language are rapid and dynamic. They occur constantly and in great numbers and variations. That is why dictionaries and language manuals need periodical updates. This is supposed to help in classifying and reflecting all the changes that have occurred in a certain period of time. Nowadays this necessity of updating is becoming even more significant. This happens because new technologies, concepts, ideas, and, consequently, new words and styles of communication shape themselves within the society and replace older ones. Sciences and industries develop new technologies and concepts daily. Hence, they need to be and are being reflected in our everyday language, accepted in our everyday life. Some words change their meaning, some get out of use, some get new meanings which are different from previous ones. Changes, such as the birth of new words, ideas and concepts, are not happening in some particular language, but in most of the world's languages. That is why not only for linguists, but for all people it is important to know them, notice, consider, and get used to the changes. Especially sharp this problem stands before the people who work or have business abroad and need to take their experience beyond the usual surrounding. Not only an industry influences the language, but the language is influenced by it as well. In his work David Crystal explained this phenomenon as follows: "This would form part of a much broader economic perspective, in ...read more.

As Dwight Bolinger stated in his book Language: the Loaded Weapon (1980), in the realm of language and thinking, the premise is that "every language has a structure that must somehow influence the way its speakers view the world." The descriptive method, hence, helps us to take a look and analyze the way other people view the world. That is one more advantage of description. Many proverbs, idiomatic and slang expressions we use in our everyday speech, are used due to the descriptive method. The descriptive approach allows us to go into the history, etymology and, possibly, the sociology of speech and language when explaining the meaning of some expression. This approach also allows us to learn and analyze why exactly people use certain phrases and words in this or that particular way. As for the weaknesses and disadvantages of the descriptive approach, one of the most important of them is that analyzing some usage or word by means of this approach we may get a very wide and long interpretation. Some ambiguity and non-uniformity may appear in such a description. And, surely, it may appear that the explanation is not too concrete, exact and correct. One more disadvantage of the given approach is that it gives much freedom and many variants to choose from. This, consequently, may potentially cause confusion among students of language who require their learning to be more rigorous and clearly structured. Another weakness is that some overzealous descriptivists tend not only to describe the usage of language , but try to take the initiative of changing and developing. Such scientists are likely to change and develop through encouraging the "death" of old-fashioned usages or those which they consider irrelevant in a society which has immersed itself in the technological progress. They believe it is their duty to proceed and chop off everything what in their opinion is no fashionable or appropriate any more. ...read more.

Now we can draw the essential principles from each one and decide how we may use them in order to carry out further research with the objective of adding to the growing body of language data. It is important to notice that from the perspective of the constantly and quickly changing world and language the descriptive approach may seem better, but it is important to remember that the world of symbols and meaning can be chaotic and, hence, need certain services of prescriptivists to diminish that confusion. Now we do not have to decide which school's arguments are more convincing and what approach should dominate. We think the idea should be to go ahead and use the rules as they apply to the majority of users. Understanding should be the main focus. A compromise can always be found, and a blending of two worlds can result in a beautiful harmony of ideas and teachings. Students today and students of tomorrow would be the beneficiaries of this union of opposing approaches because they certainly will not waste time arguing passionately, when they can always channel those passions to new fields of endeavor within communications or Linguistics. Bibliograohy Bolinger, Dwight. Language: the Loaded Weapon - the Use and Abuse of Language Today. New York: Longman Group Limited, 1980. Crystal, David. Language Death. Cambridge: University Press, 2000. Crystal, David. The Cambridge Encyclopedia of the English Language. Cambridge: Cambridge University Press, UK. 1995. Liberman, Mark. Prescriptive and descriptive linguistics. Linguistics 001. Lecture 3. The Language Wars. 2005. Retrieved from http://www.ling.upenn.edu/courses/Fall_2005/ling001/prescription.html Accessed 13 September, 2006 Peters, Pam. The Cambridge Guide to English. Cambridge: Cambridge University Press, 2004. Usborne, Nick. Net Words - Creating High Impact Online Copy. New York: McGraw Hill, 2002. Wilson, Kenneth G. The Columbia Guide to Standard American English, New York: Cambridge University Press. 1993. "Descriptive and Prescriptive Grammar", Articles. Using English.com. Retrieved from http://www.usingenglish.com/articles/prescriptive-descriptive-grammar.html Accessed 12 September, 2006 Wikipedia Foundation Inc. "Corpus Linguistics". Wikipedia. Retrieved from http://en.wikipedia.org/wiki/Corpus_linguistics Accessed 12 September, 2006 ?? ?? ?? ?? 1 ...read more.