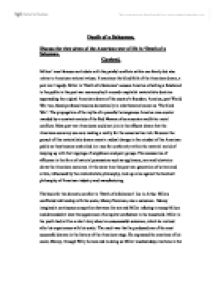 Discuss the view given of the American way of life in 'Death of a Salesman.

Death of a Salesman. Discuss the view given of the American way of life in 'Death of a Salesman. Context. Millers' most famous work deals with the painful conflicts within one family but also relates to American national values. It examines the blind faith of the American dream, a post war tragedy. Miller in 'Death of a Salesman' accuses America of selling a falsehood to the public in the post war economy built around a capitalist materialistic doctrine superseding the original American dream of the country's founders. America, post World War two, faced profound tensions domestically in what became known as 'The Cold War'. The propagation of the myths of a peaceful homogenous America was counter manded by a constant anxiety of the Red Menace of communism and bitter racial conflicts. Most post-war Americans could not join in the affluent dream that the American economy was now making a reality for the conservative rich. However the pursuit of this materialistic dream meant a radical change in the mindset of the American public as they became embroiled in a race for conformity within the material world of keeping up with the trappings of neighbours and peer groups. The accessories of affluence in the form of material possessions such as appliances, cars and television drove the American economy. At the same time the post war generation of writers and artists, influenced by the existentialists philosophy, took up arms against the hard sell philosophy of American industry and manufacturing. ...read more.

Linda his wife tries to persuade Willy to talk to his boss Howard Wagner about giving him a job in New York so he won't have to travel. Willy dismisses his wife's concern and instead complains about his son Biff who has returned home on a visit along with his second son Happy, and as of yet has not made something of himself. Biffs return is a catalyst that opens up old wounds for his father, as we shall see later in the plot. (Act one P.10). In order for Willy to keep his fantasy of the American dream he has to deal with the contradictions he experiences in his job and within his family. Willy is on the road selling whilst Linda stays at home looking after the boys. This makes Willy's family life occasional or part time. Linda, who supports Willy's fantasised view of the American Dream, represents the lot of the American housewife of the period. Much of the selling of the dream was through television and aimed at the American Housewife. Miller's portrayal of Willy Loman as the archetypal salesman is a Marxist analogy of the capitalistic system were the majority of American citizens did not own the means of production and had to work for a salary or hourly rate. If we move back to the play we can see Millers criticism of the American Dream and the cost to Willy as he tries to realise his own fantasy of the American Dream. ...read more.

The American dream was disintegrating. Miller does not include Black Americans or the Native Americans in the play but in doing so points to the hypocrisy of the dream, which excludes them. Miller purposely crowds in on Willy leaving him no way out of his dilemma, just like America runs out of wilderness where the original dream was possible Willy runs out of proverbial road and is left with a dead end with only one way to go. Analysis. Millers 'Death of a Salesman', is an analogy of the 'American Dream'. Miller uses the Loman family as a symbolic representation of the American way of life. The dream of solid family structures and opportunity for all is starkly portrayed in the dysfunctional Loma family. Willy's choice of career is flawed due to his past insecurities caused by being abandoned by his father. To compensate for his insecurity Willy Loman creates a world of fantasy where everything is always well and he is the hero of his life. When Willy becomes ill with the onset of dementia his world and that of his family begins to disintegrate, as he can no longer hold his fantasy together. People and circumstances gather and undermine his self-deluding strategies for survival. The poignancy of the play reveals itself in Willy's futile suicide. His epitaph from Linda at the graveside when she says "Willy I can't cry. It seems to me that you're just on another trip". Starkly portrays their occasional life together. Willy will not be missed. Willy dies as Biff suggested 'ten a penny'. The tragedy in Millers play is a warning to American society to beware of false prophets who come baring gifts. ...read more.