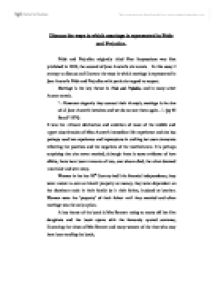 Discuss the ways in which marriage is represented in Pride and Prejudice.

Discuss the ways in which marriage is represented in Pride and Prejudice. Pride and Prejudice originally titled First Impressions was first published in 1813, the second of Jane Austen's six novels. In this essay I attempt to discuss and illustrate the ways in which marriage is represented in Jane Austen's Pride and Prejudice with particular regard to respect. Marriage is the key theme in Pride and Prejudice, and in many other Austen novels. '...However elegantly they conceal their triumph, marriage is the aim of all Jane Austen's heroines and we do not see them again...'. (pg 45 Beer.P 1974) It was the ultimate destination and ambition of most of the middle and upper class females of Miss Austen's immediate life experience and she has perhaps used her experience and impressions in crafting her own characters reflecting the positives and the negatives of the married state. It is perhaps surprising that she never married, although there is some evidence of love affairs, there have been rumours of two, one whom died, the other deemed unsuitable and sent away. Women in the late 18th Century had little financial independence, they were unable to own or inherit property or money, they were dependant on the dominant male in their family be it their father, husband or brother. Women were the 'property' of their father until they married and often marriage was the only option. ...read more.

This also shows he has no respect for her or her family. Mr Collins and Charlotte Lucas could be seen as either a good marriage or a bad marriage. It is a marriage of convenience, all Charlotte wishes is a comfortable home, and Mr Collins is one able to provide that for her, she does not require his love nor does she give any herself. 'I am not romantic, you know. I never was. I ask only a comfortable home.'(pg 122) This quote from Charlotte Lucas directed at Elizabeth shows that she is not marrying Mr Collins for love or anything other than security in life as many real women of the time did marry for security rather than love. The marriage is more a business agreement or a companionship. Mr Collins reasons for marriage are also not for love. He believes that in marrying he will be setting an example to the people of his parish but more importantly it is the wish of Lady Catherine De Burgh that he marries a suitable lady. Mr Collins and Charlotte begin with respect for each other but I think he gradually loses her respect through his constant embarrassment of her. Mr Collins shows little respect for Elizabeth in proposing to her only because he stands to inherit Mr Bennett's estate and even less respect for her family in the same way 'Where the male entail [Mr Collins] threatens the Bennett girls with marriages of convenience,' (pg 136 Gilbert.S.M, Gubar.S 1979). ...read more.