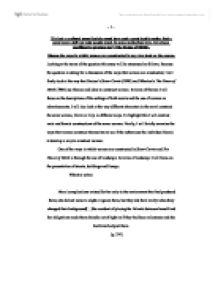 Discuss the ways in which women are constructed in any two texts on the course.

'He had a confused sense that she must have cost a great deal to make, that a great many dull and ugly people must, in some mysterious way, have been sacrificed to produce her' (The House of Mirth). Discuss the ways in which women are constructed in any two texts on the course. Looking at the terms of the question this essay will be structured as follows. Because the question is asking for a discussion of the ways that women are constructed, I will firstly look at the way that Dreiser's Sister Carrie (1900) and Wharton's The House of Mirth (1905) use themes and ideas to construct women. In terms of themes I will focus on the descriptions of the settings of both novels and the use of women as advertisements. I will also look at the way different characters in the novel construct the same woman, Carrie or Lily, in different ways. To highlight this I will contrast male and female constructions of the same woman. Finally, I will briefly examine the ways that women construct themselves to see if the authors use the individual female to develop a way to construct women. One of the ways in which women are constructed in Sister Carrie and The House of Mirth is through the use of landscape. In terms of landscape I will focus on the presentation of streets, buildings and Europe. Wharton writes: Moral complications existed for her only in the environment that had produced them; she did not mean to slight or ignore them, but they lost their reality when they changed their background[...]the accident of placing the Atlantic between herself and her obligations made them dwindle out of sight as if they had been milestones and she had travelled past them. (p. 214) Lily's problems occurred against the backdrop of New York. The Atlantic acts as a divider between Lily and her problems. ...read more.

Like Gelfant, Dreiser uses advertisements as a way to construct women. Mrs Vance says to Carrie: Oh dear have you seen the new shirts at Altman's? They have some of the loveliest patterns. I saw one there that would look stunning on you. (p. 327) The style of Mrs Vance's speech presents her as someone who is trying to sell something. He uses adjectives that are complimentary and conjure up a flattering picture for Carrie of herself. She is presented, as saying there is 'one' garment. This implies that the item is unique. This could be argued to be a tactic used by advertisers to make a product more desirable. Dreiser uses the personal pronoun 'you' and the adjective 'stunning'. This creates an image for Carrie of herself in the shirt-waist. Mrs Vance is constructed as an advertiser of fashion. She constructs what Carrie should desire. She also creates the way Carrie should look and what she should wear in order to look 'stunning'. Mrs Vance's presentation as an advertisement of fashion, beauty and the wealthy and glamorous way of life that is equated with the two is confirmed when Carrie asks Hurstwood for money to buy clothes shortly after Mrs Vance's speech. Before this point Carrie has not asked anyone to buy things for her. When she was with Drouet she was given clothes and persuaded to get them. After Mrs Vance's speech Dreiser describes how Carrie 'began to suggest one thing and another[...]Carrie's wants were expanding' (p. 328). This shows how Mrs Vance Mrs Vance has helped to construct Carrie as a consumer. The use of women as advertisements also shows how other people construct women in order to promote a certain image or identity. After she becomes a celebrity Mr Withers approaches her (p. 450). He offers her the chance to stay in the luxurious 'Wellington' apartments. The reason she is offered a place to live in 'The Wellington' is because she is famous (p. ...read more.

153-5). Wharton's concealment of the word on Lily's mute lips means that Lily, even in death, does not construct herself (p. 348). She lets the readers speculate and come up with their own constructions of what the word is and how that word reveals whom the real Lily is. However, the mysterious word also enables Lily to reclaim some control over her sense of self. She has been a character that is constructed by others. By keeping the word private she makes sure that she is constructed as a mystery and therefore, something indefinable. Lily is the only person able to define herself, and her death means this can never occur. In my opinion, the only time Lily constructs herself is in death. She becomes a figure of mystery and intrigue and this construction can never be altered. Hook surmises that late nineteenth and early twentieth century New York is the: Heartless, pitiless and cruelly unconcerned about the fate of the unfortunate individual [...]the winner takes all and the lose is left to his fate.10 The post-twentieth century societies depicted in Sister Carrie and House of Mirth reward those who are able to adapt to a more independent, self-sufficient way of life. Carrie is able to reconstruct herself as she progresses in society. This is in contrast to Lily, who allows other people to impose their constructions of her upon her but fails to construct an identity for herself. Ultimately the constructions of Carrie and Lily are founded on illusions. They are the perceptions and ideas of other characters, which are imposed upon the female leads of Wharton and Dreiser's novels. Even Carrie's construction of herself is based on illusion. Ironically, the only construction of a character that is rooted in reality is Lily. Death is a tragically real ending for Wharton's heroine. However, Wharton's use of the mysterious word at the novel's conclusion constructs Lily as still being alive, her legacy being a construct based on the mystery of the unspoken word and the imaginings and fantasies of the reader over what the word is. ...read more.