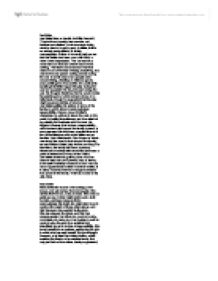 Joe Keller Joe Keller lives on denial. As Miller has said, "The truth and mankind are cousins, not brothers and sisters." He is a survivor doing what he has to, to get by and, to Miller, that is an entirely recognisable, if, finally, unacceptable, motive. In an early draft we are told that Keller had been poor until 1938, a victim of the Depression. The war had thus made him and he knew what it was to have nothing. That fact is removed from the final version but not the fear of losing everything. Nor was he the only person cutting corners during the war. In small ways many people were compromising, cheating on rationed goods, even profiting from the conflict. It is worthwhile recalling that Miller began this play during the war and expected it to be produced during the war. He thought, therefore, that he would merely be speaking aloud what everyone knew on a daily basis, though he suspected that the play might cause something of a furore. ...read more.

She turns herself into an actress, performing the role in which she has cast herself. It is her strength, however, or at least her determination, which sustains the illusion of a carefree family. But only just below the surface, barely suppressed, is a truth that can destroy them all. The other side of her determination, however, is cruelty. Inclining to one son she disregards the needs of another. She fights to drive Ann out, and with her a reminder of Larry's death and her husband's guilt. She is fighting for her survival and the survival of a family which, in truth, no longer exists. At the end, she has lost everything: both sons and her husband. She is bereft. In struggling to sustain her version of the family she has destroyed it. Chris Keller Chris Keller comes back from the war having seen men sacrifice themselves for others. There, he feels, was a functioning idealism. But in the name of what did men fight and die? ...read more.

They contain in themselves the conflicts at the heart of the play, acknowledging, as they do, a tension between the pragmatic and the ideal, and recognising the compromises that seem an inevitable aspect of daily living. Marriage itself, on the basis of those in this play. offers an image of such compromises, a fact that will surely cast its shadow over the proposed relationship between Chris Keller and Ann Deever. The doctor, especially, has sacrificed his idealistic vision of his profession for hard cash and the word 'money' echoes through the text. George Deever Miller has said that George represents the return of the repressed. It is he who breaks into this apparently happy family, bringing with him the past, except that the past has never been laid to rest. He, too, has been guilty of cruelty in abandoning his father, and comes to insist on justice. In the end, however, he is easily deflected, pulled into the play that Kate scripts and stage manages. Though he appears to be the figure who can smash the apparent serenity of this embattled family, he is no more than a catalyst. He lacks the relentlessness of his sister and of Kate. ...read more.