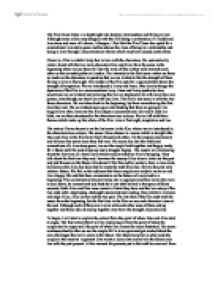 The film Closer takes a in depth sight into destiny, relationships and falling in love. Although some critics may disagree with the film being a convention of a traditional love story and more of a drama, I disagree. I feel that the film Closer has opted for a conventional love story genre and has shown the vices of being in a relationship and being in love through a unconventional theme which may have caused controversy. Closer is a film in which I truly feel in love with the characters. We automatically make a bond with the two main characters Dan and Alice from the scene in the beginning where we see them fall into the arms of fate as they walk towards each other on the crowded paths on London. The intensity in the first scene makes us focus so much on the characters in question that we are invited to feel the strength of them falling in love at first sight. The middle of the film opts for a approach that shows the strength of temptation. We are introduced to Larry and Anna, who slowly change the dynamics of the film in a unconventional way. Anna and Larry symbolise how sometimes we are tricked into believing that we are destined to be with more than one person, even though our heart lies with one love. ...read more.

At the moment his present past is the truth he received from Larry about Alice.Corrupted memories and wanting to know so much brings upon this argument, we see earlier on in the film Dan visit Larry at his doctors surgery. Larry warns Dan from Anna his wife but reverts him to Alice, Dan's true love, as Dan is leaving the surgery Larry bluntly mentions that he slept with Alice. As a member of the audience we do not know whether or not Larry is lying, but automatically take it as the truth as Larry seems to be harshly blunt and to the point, he doesn't seem to want to cause harm to Dan but just wants Dan to leave him and his wife Anna alone. Dan and Alice start to argue as Alice becomes uneasy about the past and she seems to focus on the future. Alice doesn't understand why Dan is asking her such questions on her sleeping with Larry, however she does not give the impression that Larry is lying and does not deny the statement. A frustrated Dan leaves the room angry and leaves Alice by herself. However Dan runs back with a rose he picks up from the hotel corridor, the film goes down a conventional root of a love film and we assume that the couple are going to get through this dark era. ...read more.

Alice starts to struggle to make Dan leave, he doesn't and she ends up spitting on his face. Dan raises his hand, he puts it down and Alice says " go on hit me you f****r" he does. He follows he command and slaps her on the face, that's when the relationship come to the last point. We finally see his true colours. The last part of the extract moves from the scene in which Dan slaps Alice to a close screenplay of each and every character in the play. This is the first time in the film we see each and every character in the film alone it also shows us some of the most important facts that we didn't know about and get to know now. I take this last part of my extract to be very unconventional, it doesn't show the lovers together but shows them apart and learning lessons that they could have learned together. We first see Larry and Anna in bed, the camera focuses on Anna and we know that she will never be happy. The next shot then goes to Dan, who is back to the first place he took Alice. This is a war memorial place and we then see the truth about 'Alice'. Alice is actually called 'Jane' and the name Alice Ayers which she told Dan at the beginnig was a name off a war memorial wall. NOT FINISHED NEED BETTER ENDING. ...read more.