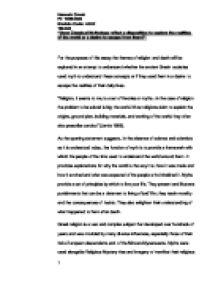 Does Classical Mythology reflect a disposition to explore the realities of the world or a desire to escape from them?

"Does Classical Mythology reflect a disposition to explore the realities of the world or a desire to escape from them?" For the purposes of this essay the themes of religion and death will be explored in an attempt to understand whether the ancient Greek societies used myth to understand these concepts or if they used them in a desire to escape the realities of their daily lives. "Religion, it seems to me, is a set of theories or myths...In the case of religion the problem to be solved is big: the world. Most religions claim to explain the origins, ground plan, building materials, and working of the world; they often also prescribe conduct" (Jarvie 1969). As the opening statement suggests, in the absence of science and scientists as it is understood today, the function of myth is to provide a framework with which the people of the time used to understand the world around them. It provides explanations for why the world is the way it is; how it was made and how it evolved and what was expected of the people who inhabited it. ...read more.

The Eleusinian Mysteries are purported to be amongst the most important of these cults. It was a cult that was open to all; men, women, children and slaves. They had to be initiated into the cult and forever after keep the secrets from being revealed. It is highly likely they evolved from an agrarian cult but by assimilating the myth of Demeter and Persephone it gave a reason and an explanation of why the seasons changed, why crops grew and why the land was barren during the winter months. No one will ever know for certain what went on during the celebrations but for those involved it provided a "philosophy of life that possessed substance and meaning and imparted a modicum of truth to the yearning human soul" (Mylonas 1961). Death and the afterlife have been universal subjects that people have explored since time began. Heraclitus, Plato and Hume all said that the question of life after death is incomprehensible and that that particular mystery may be beyond the reach of rational knowledge (Moody 2007). Yet it is the ideas of ancient Greek philosophers that laid the foundations and set the agenda for all subsequent and rational thought, much of which is still evident today. ...read more.