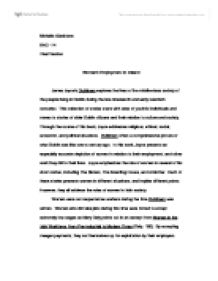 Dubliners offers a comprehensive picture of what Dublin was like over a century ago. In this work, Joyce presents an especially accurate depiction of women in relation to their employment,

Michelle Gladstone ENG 114 Final Version Women's Employment in Ireland James Joyce's Dubliners explores the lives of the middle-class society of the people living in Dublin during the late nineteenth and early twentieth centuries. This collection of stories starts with tales of youthful individuals and moves to stories of older Dublin citizens and their relation to culture and society. Through the course of this book, Joyce addresses religious, ethical, social, economic, and political situations. Dubliners offers a comprehensive picture of what Dublin was like over a century ago. In this work, Joyce presents an especially accurate depiction of women in relation to their employment, and other work they did in their lives. Joyce emphasizes the role of women in several of his short stories, including The Sisters, The Boarding House, and A Mother. Each of these stories presents women in different situations, and implies different points. However, they all address the roles of women in Irish society. Women were not respected as workers during the time Dubliners was written. Women who did take jobs during this time were forced to accept extremely low wages as Mary Daly points out in an excerpt from Women in the Irish Workforce From Pre-Industrial to Modern Times (Daly, 195). ...read more.

With the sisters' unmarried status, they fit in perfectly with the statistics of shopowners for the early twentieth century. In Ireland, "of women shopowners approximately 20 percent were married, 35 percent widowed, and 44 percent unmarried" (Walzl, 77). As was said earlier, they most likely inherited the shop when their father died or he helped them establish it for their own security (Walzl, 75). Joyce does an excellent job of accurately portraying Eliza and Nanny of elderly spinsters in early twentieth century Ireland. In The Boarding House, Joyce introduces Mrs. Mooney. She is a woman who married a keeper of a butcher shop who later turned into an alcoholic as Walzl points out. He spent all of their money, and got their family deep into debt. However, because she is such a "determined" and strong woman, she left her husband and started a very successful boarding house of her own in central Dublin. Walzl points out that owning and running boarding houses and lodging houses in the early twentieth century was a very common job at the time. In 1904 Thom's Directory provides information that "women operated all the boarding houses listed and 75 percent of lodging houses" (Walzl, 75). ...read more.

However, like so many other stories in this book, Kathleen is doomed to follow in her mothers' footsteps. Mrs. Kearney was afraid to take chances in her own music career, causing it to end prematurely; and she does the same thing with Kathleen. Mrs. Kearney takes no chances when dealing with being paid and therefore ruins Kathleen's career. Joyce seems to use mothers as a theme in many of his stories. As Walzl tells us, "Mothers in Dubliners tend either to use their daughters or to vent their own frustrations through them," and it appears that Mrs. Kearney is venting her frustrations of her music career through Kathleen by pushing her into a career of playing and singing (Walzl, 80). Walzl also says that "mothers so influence or manipulate their daughters that, in effect, the young women relive their mothers' lives," this also seems to reflect the lives of Kathleen and Mrs. Kearney (Walzl, 81). Kathleen will most likely end up marrying a man and settling into a dull life just like her mother because her career was ended early, just like her mother's. James Joyce meant for Dubliners to portray the real lives and society of early twentieth century Ireland. Through my research I have found that Joyce's depiction of women and their occupations is real and accurate. Joyce does an excellent job of portraying Dublin as it really was. ...read more.