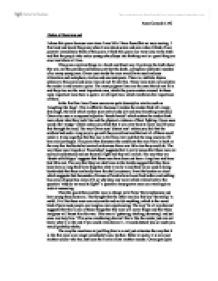 Dulce et Decorum est I chose this poem because ever since I was little I have found this so very moving. I first read and learnt this poem when I was about seven and now when I think of war poetry I immediately think of this poem. I think this poem lies very close to the truth and that the people who entice young schoolboys into thinking war is a great thing are cruel and above all liars. This poem explains things in a harsh and blunt way. It portrays the truth about this war, not the parades and honour part but the death, corruption and brutal murders of so many young men. Owen uses words the men would have used and uses alliteration and metaphors, similes and onomatopoeia. ...read more.

The way Owen says' distant rest' makes you feel that the soldiers had such a long way to go until they could rest and that not all of them could make it. It also signifies that this war is far from over and that the long journey of it has only just begun. The poem then discusses the conditions the men were in such as the way few had boots but carried on because there was little else they could do. The way these men limped on 'blood shod' suggests that it really means that these men are scarred and battered and yet they still fight and they still march. The way they are 'drunk with fatigue' suggests that these men have been out here a long time and have had little rest. ...read more.

The way 'In all my dreams' suggests that this is one of those things that this man will never forget and that these imagines will haunt him for ever. This man is 'guttering, choking, drowning' and yet none can help him. 'If in some smothering dreams' this is like the reader just can not know what it is like and if you could even dream it , it would disturb you so much you would probably choke. The way the men have to just fling him in a cart just reiterates the way that it is like this man is no longer somebody's son, brother, father or uncle; it is now just another soldier who has just been the victim of yet another murder. Owen gets quite angry with people who say that war is a noble thing to fight in and he tries to tell people that the old 'lie' is wrong. Dulce et D decorum est Pro Patria Mori. Anna Cornock LVG ...read more.