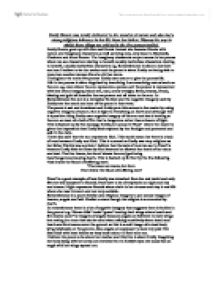 Emily Bronte was totally dedicated to the wonder of nature and also had a strong religious influence in her life from her father. Discuss the way in which these things are evident in the five poems studied.

Emily Bronte was totally dedicated to the wonder of nature and also had a strong religious influence in her life from her father. Discuss the way in which these things are evident in the five poems studied. Emily Bronte grew up with few real friends instead she became friends with nature and imaginary characters as well as being very, very close to Bramwell, Charlotte and Anne Bronte. The imaginary characters are put across in her poems where we see characters relating to herself, usually motherless characters relating to herself , usually motherless characters e.g. Remembrance is about a lost love and one I believe to be the mother and the poem is about Emily not being able to treat, love another women like she did her mum. Throughout the entire five poems Emily uses nature to give the poems life. Life in her poems is often disguised by describing it as something natural such as the sun e.g. stars where the sun represents a person and the person is represented with lots of sun imagery, blood red, rose, arrow straight, fierce, beams, struck, blazing and gold all describe the sae person and all relate to the sun. In Remembrance the sun is a metaphor fro God and the negative imagery used by Emily sets the mood and tone of the poem in that verse. ...read more.

Also angels are supposed to look very pale this also links with dead bodies as they loose colour in their skin too. I believe the poem to be about her mother and this line is about Emily imagining her body lying with her arms out stretched but in Emily's eyes she looks like an angel with her wings spread out. Other religious references in Remembrance include 'morn' which is a direct negative religious word relating to death/funeral. 'Heathen' although positive is still dealing with death and is negative when the death was before its time. Remembrance is also filled with lots of information about nature; this would be down to Emily's experiences as a child and growing up in both worlds (Reality and Gondal). A common theme in Emily's poem was negative imagery of water. There were examples of this in both 'Stars' and 'Remembrance'. 'Remembrance' includes examples such as 'severed at last, by times all severing wave' also the words 'tears' and 'drinking deep' are negative. Tears are negative as it represents sadness while drinking deep represents drowning or being over indulged by water. In Stars we see negative water imagery that has a strong link to drowning. 'Sea' 'fall' 'sank' 'waved' 'tears' and 'drank'. Petrel on the sea, sank, drank and tears are especially negative. ...read more.

This shows the reader that Gondal is where she is, is in-between earth and heaven. She is deciding where to go heaven or earth. Before Emily died she refused treatment for her cold and many believed that she refused treatment for her cold because she wanted to die. The sun represents her mum and the poem concentrates in heaven and earth. The poem is exploring the up and down sides to earth. Life + death, hope + fate, pleasure + treachery, reason + paid, truth + greed, joy+ peace. She is basically thinking heaven + Earth. 'And joy is the surest path to pain' this means she would be happy to be with her mum again but she would be in pain dying and would also cause pain to those on Earth who knew her. My comforter has interesting references to nature such as describing her habitat as a den. A den is more commonly used to describe a place where animals such as big cats would live. Savage also links in with this as big cats would be described as savage. Here Emily is using her knowledge of nature to give the poem a more wild edge. The five poems are heavily influenced by nature and also religion as I have explained along with a few ideas of my own. The poems all link to each other in different ways such as the extended water imagery in all 5 poems. There's Mention of heaven and hell in three of the poems as well. ...read more.