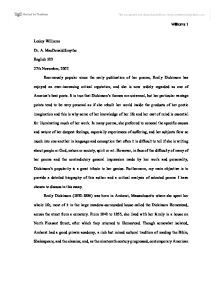 Lesley Williams Dr. A. MacDonald Smythe English 103 27th November, 2007. Enormously popular since the early publication of her poems, Emily Dickinson has enjoyed an ever-increasing critical reputation, and she is now widely regarded as one of America's best poets. It is true that Dickinson's themes are universal, but her particular vantage points tend to be very personal as if she rebuilt her world inside the products of her poetic imagination and this is why some of her knowledge of her life and her cast of mind is essential for illuminating much of her work. In many poems, she preferred to conceal the specific causes and nature of her deepest feelings, especially experiences of suffering, and her subjects flow so much into one another in language and conception that often it is difficult to tell if she is writing about people or God, nature or society, spirit or art. However, in face of the difficulty of many of her poems and the contradictory general impression made by her work and personality, Dickinson's popularity is a great tribute to her genius. Furthermore, my main objective is to provide a detailed biography of this author and a critical analysis of selected poems I have chosen to discuss in this essay. Emily Dickinson (1830-1886) was born in Amherst, Massachusetts where she spent her whole life, most of it in the large meadow-surrounded house called the Dickinson Homestead, across the street from a cemetery. ...read more.

She remained a faithful daughter and sister, and a faithful friend to many whom she related through letters. Dickinson insisted that she did not suffer from isolation and that she felt deeply fulfilled and in intimate contact with the world. It is evident that she wanted to make her relatives proud of her work after she died, and her combination of pride and resignation probably stemmed through her great gift and her frustration that so many people were mystified by her poems. Many of her poems give eloquent testimony that she longed for audience and as luck would have it, her poems survived. But their struggle for adequate publication, understanding, and recognition almost parallels her inner life in its complexity. Most of Emily Dickinson's poems are written in short stanzas, mostly quatrains, with short lines, usually rhyming only on the second and fourth lines. Other stanzas employ pairs of couplets or triplets, and a few poems employ more complicated stanzas. A large number of Dickinson's rhymes are partial, slant, or off-rhymes, some of these to be barely recognizable. Also, iambic rhymes dominate, but they are varied, speeded and slowed, in many ways. The most striking signature of Dickinson's style is the blending of homely and exalted images, metaphors, and scenes in her poems. Her metaphors incorporate elements so condensed that one must "dig deep" to reveal the full structure of an idea or picture. ...read more.

a life locked up, not free, without passion or expression. In the third stanza, the speaker imagines death scenes in which she would prefer to comfort her dying lover rather than to die with him. She is also reluctant to die with him because that would give her the horrible shock of seeing her lover as Jesus and heaven itself. The lover is like God, and love is superior to heaven. For two stanzas, beginning with "They'd judge us-How" (line 29) the speaker's attention moves to the unconventional nature of her love. The speaker's desperation now threatens the poem's coherence. The last stanza does not connect logically to what precedes it. The poem seems to return to the world of the living, and it seems to be saying that the lovers' complicated prospects and perhaps their shocking unconventionality make the future so uncertain that they can depend on only the small sustenance of their present narrow communication and tortured hopes. The short lines and abruptly rocking movement of the poem echo their struggles. Dickinson's poems are often difficult because of their unusual compression, unconventional grammar, their strange diction and figures of speech, and their often generalized symbolism and allegory. The speaker in these individual poems is often hard to identify. Furthermore, her condensed style and monotonous rhymes make sustained reading of her work difficult. Perhaps most important for understanding Emily Dickinson is the testing of one's conceptions of the tone or tones of individual poems and relating them to other poems and to one's emotional ideas and feelings. ...read more.