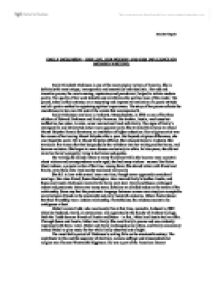 Monika Glegola EMILY DICKINSON - HER LIFE, HER POETRY AND HER INFLUENCE ON MODERN WRITING. Emily Elizabeth Dickinson is one of the most original writers of America. She is definitely the most unique, incomparable and essentially individualistic. Her odd and inventive poems, the most amazing, mysterious and paradoxical, helped to initiate modern poetry. The quality of her work disturbs and overthrows the spiritual ease of the reader. The poems, taken in their entirety, are a surprising and impressive revelation of a poetic attitude and of a poetic method in registering spiritual experiences. The story of her poems reflects the resemblance to her own life and all the events that accompanied it. Emily Dickinson was born in Amherst, Massachusetts, in 1830 as one of the three children of Edward Dickinson and Emily Norcross. Her brother, Austin, was bossy but ineffective; her sister, Lavinia, never married and lived with Emily. The signs of Emily's introspective and introverted nature were apparent early. She traveled from home to attend Mount Holyoke Female Seminary, an institution of higher education. Her religious crisis was the reason of her leaving Mount Holyoke after a year. But beyond religious differences, she also found the social life at Mount Holyoke difficult. She returned home to Amherst. She traveled a few times after that but gradually she withdrew into her writing and her home, and became reclusive. She began to wear dresses exclusively in white. ...read more.

Idea and expression are indissolubly fused in her work. The simplicity and quivering responsiveness to emotional moods are a direct reflection of her personality. The objective medium is entirely conformable to the inner life, a life of a peculiarly dynamic force which agitates, arouses, spurs the reader. The popular conception of the poet as a reclusive, eccentric figure has been challenged by later feminist critics1 who have also underlined her intellectual and artistic sophistication. They point out that Dickinson's imagery reflects an intense and painful struggle over many years, that her verse is full of allusions to volcanoes, shipwrecks, funerals, and other manifestations of natural and human violence, which she hid into her writings. Pain and extreme psychic feelings were among her central themes. Pain widens the sense of time, it swallows the self, creates its own sense of eternity. The secret of Emily Dickinoson's wayward power seems to lie in three special characteristics, as it is described by Dareen Wardrop in Emily Dickinson's Gothic, the first of which is her intensity of spiritual experience. Hers is the record of a soul endowed with unceasing activity in a world not material, but one where concrete facts are the cherished revelation of divine signifcance. Wardrop wrote : " Inquisitive always, alert to the inner truths of life, impatient of the bfief destinies of convention, she isolated herself from the petty demands of social amenity. ...read more.

The publication of Thomas H. Johnson's edition of Emily Dickinson's poems finally gave the readers a complete and accurate text. Johnson's work was not made easier that the author had left the alternative versions of words, lines and sometimes the whole poems. Emily Dickinson's life is very much open to speculation, legend and myth simply beacause little is known about it. However, by way of biographical material in the extraordinary intimacy of her poetry, it would seem that there is everything known about her. Her voice is recognizable anywhere in her poems. The willingness to look with a clear directness at the spectacle of life is observable everywhere in her work. She presented the passionate fortitude, and this is the greatest contribution her poetry makes to the reading world. It is not expressed precisely in single poems, but rather is present in all, as a key and interpretation of her meditative scrunity. Without elaborate philosophy, yet with irresistible ways of expression, Emily Dickinson's poems have a true lyric appeal, because they make abstractions, such as love, hope, loneliness, death and immortality, that seem near and intimate and faithful. She looked at existence with a vision so exalted and secure that the reader is long dominated by that very excess of spiritual conviction. Emily Dickinson is a poet in the deeper mystic qualities of feeling rather than in the external merit of precise rhymes and flawless art, her place belongs among those whose gifts are too intristic for renown. ...read more.