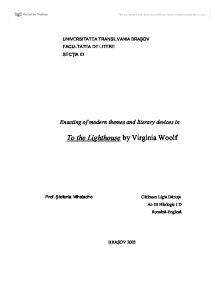 Enacting of modern themes and literary devices in To the Lighthouse by Virginia Woolf.

UNIVERSITATEA TRANSILVANIA BRASOV FACULTATEA DE LITERE SECTIA ID Enacting of modern themes and literary devices in To the Lighthouse by Virginia Woolf Prof. Stefania Mihalache Catinean Ligia Danuta An III Filologie I D Rom�na-Engleza BRASOV 2003 To the Lighthouse by Virginia Woolf In two of her essays Modern Fiction and Mr. Bennett and Mrs. Brown she said that the novels are a protest to traditional novel which really too much on the exterior reality on the surface. Virginia Woolf found necessary to create new methods and techniques, to invent a new form of novel, capable of expressing her own vision of life. She is interested in finding what is beyond things, in finding the essential truth of life. Her novels attempt both to "dissipate" character and to reintegrate human experience within an aesthetic shape or form. She seeks to represent the nature of transient sensation, or of conscious and unconscious mental activity, and then to relate it outwards to more universal awareness of pattern and rhythm. The momentary reaction, the impermanent emotions, the ephemeral stimulus, the random suggestion, and the dissociated thought are effectively 'bent' into a stylistic relationship to something coherent and structured. ...read more.

Her children love her; they do not love their father--she works harder to hold their love. The best minds about her seemingly mistrust her a little dislike her a little, for her charm is persuasive rather than compelling. She watches those about her without mingling too much, both because she chooses a vantage point - symbolized by the window - and because of her personality she becomes the dominant and focal figure of the group. Ramsay is less easy to understand, possibly because he is given less attention. In many ways he is a more interesting as well as original character: brilliant no doubt, but introverted, lacking those immediate graces which win for his wife the greater love of their children, lacking warmth, too, and a sense of social compromise--rigid in his truthfulness, a man, a thinker, where his wife is a woman, a psychologist. He lacks sensitiveness, one feels, either that or his sensitiveness is a very deep and hidden one. He loves his wife; they have a fundamental understanding, yet he is not a "help" to her in their relationships with others. And around them are their children and their friends, the fumbling Lily Briscoe, the one-sided and arrogant yet somehow pathetic Tansley; a true product of early environment: the serene Mr. ...read more.

Dalloway" in the degree to which its aims are achieved; it is superior in the magnitude of the aims themselves. For in its portrayal of life that is less orderly, more complex and so much doomed to frustration, it strikes a more important note, and it gives us an interlude of vision that must stand at the head of all Virginia Woolf's work. Encounters again her strikingly individual mingling of inward though with outward action in which the "stream of consciousness" style is liberated from its usual chaos and by means of selection and a sense of order, made formally compact--one finds the method applied to somewhat different aims. "To the Lighthouse" is a sustained meditation on time and art, morality and creativity, with meditations on different genres. Is concerned with exploring the meaning of experience, the essence of life, love, marriage and personality. It holds a place apart in Woolf's fiction, owing to its non-urban setting and focus on childhood and relations between parents and children. The novel is considered to be the symbol of the achievement of the characters wishes. The alternating light and shadow of the lighthouse beam is considered to symbolize the alternation of joy and sorrow in human life and human relationship. 2 ...read more.