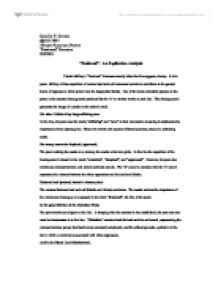 Camille Y. Gomez @01117935 African-American Poetry "Enslaved" Revision 03/02/04 "Enslaved": An Explicative Analysis Claude McKay's "Enslaved" discusses exactly what the title suggests, slavery. In this poem, McKay utilizes repetition of various hard and soft consonant sounds to contribute to the general theme of oppressive white power over the despondent blacks. One of the most noticeable patterns in the poem is the constant hissing sound produced by the "s" in various words in each line. This hissing sound generates the image of a snake in the reader's mind. Oh when I think of my long-suffering race In this line, the poet uses the words "suffering" and "race" in their connotative meaning to emphasize the importance of this opening line. These two words now assume different qualities, those of a slithering snake. For weary centuries despised, oppressed, The poet is taking the reader on a journey; the snake is the tour guide. In this line the repetition of the hissing sound is heard in the words "centuries", "despised", and "oppressed". However, the poet also introduces contrast between soft sounds and hard sounds. ...read more.

The implications of an inherited land would be that slavery did not exist. Robbed in the ancient country of its birth, Here, the poet introduces the liquid sound "r" in the words "robbed", "country", and "birth". Along with the fricative, "s", it symbolizes the continuity and longevity of the period of slavery. The ever-present hissing sound heard in the word "its" is a reminder if the serpentine beast that stole blacks from their home. My heart grows sick with hate, becomes as lead, This line directly addresses the poet's contempt for all that blacks, as a race, endured throughout slavery. The poet's contempt for the white oppressors prevails as the hissing "s" continues in the words "grows", "as", "sick", and "becomes". It is in stark contrast to the hard sound "k" in the latter two words. This contrast continues to represent the difference between the white oppressor and the enslaved black. For this my race has no home on earth. The slithering tour guide moves along on the journey, making blacks homeless. ...read more.

Let it be swallowed up in earth's vast womb It is apparent that the journey is coming to an end. This is indicated by the word "swallowed", which shows the hissing "s" being immediately followed by the glide "w". This disallows the continuation of the hissing sound. Incidentally, the repetition of the "oom" sound in the words "consume" and "womb" makes the reader think of the word doom, toward which the snake is heading. Or upward roll as a sacrificial smoke The consonance utilized in the phrase "sacrificial smoke" creates the perfect image of a hissing snake as well as informs the reader that both words are equally important in forecasting the inevitable demise of the snake. To liberate my people from its yoke! Though not in a heavily pronounced form, the hissing sound is still present in the word "its". This is an attempt by the poet to inform the reader of the key issue at hand; slavery, which gave birth to racism, is not in the past. The poet, in this line, suggests that slavery, though not in original form, still exists, and blacks, as a people, are not free. ...read more.