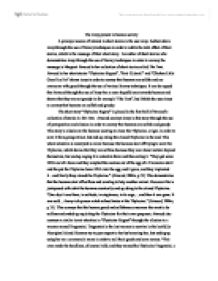 The irony present in human society

The short story “Thylacine Ragout” is placed in the first half of Atwood’s collection of stories in The Tent.  Atwood conveys irony in this story through the use of juxtaposition and allusion in order to convey that humans are selfish and greedy. This story is allusion to the humans wanting to clone the Thylacine, a tiger, in order to save it from going extinct, but end up eating the cloned Thylacine in the end. This whole situation is conveyed as ironic because the humans start off trying to save the Thylacine, which shows that they are selfless because they care about matters beyond themselves, but end up caging it to entertain them and then eating it. “They got some DNA out of a bone and they emptied the nucleus out of the egg of a Tasmanian devil and the put the Thylacine bone DNA into the egg, and it grew, and they implanted it…and finally they cloned the Thylacine.” (Atwood, 2006c, p.73) This demonstrates that the humans start off selfless and wanting to help another animal. However this is juxtaposed with what the humans eventually end up doing to the cloned Thylacine. “One day it was there, in solitude, in singleness, in its cage,…and then it was gone. It was sold…Avery rich person witch refined tastes at the Thylacine.” (Atwood, 2006c, p.75)  This conveys that the human greed and selfishness overcame the want to be selfless and ended up exploiting the Thylacine for their own purposes. Atwood also conveys a similar ironic situation in “Thylacine Ragout” through the allusion to a woman named Trugannini. Trugannini is the last woman to survive in the last fully Aboriginal Island. Humans try to pay respect to her by honoring her, but ending up using her as a commercial name in order to sell their goods and earn money. “This even made the headlines, of course it did, and they named the Thylacine Trugannini, a name you see on restaurant menus in that pat of the world, as a gesture of respect perhaps.” (Atwood, 2006c, p.74) This suggests that humans start off trying to be virtuous towards this woman in order to pay respect to her. However this is juxtaposed with what they eventually end up doing to her dead soul. “Thylacine Trugannini, a name you see on restaurant menus in that part of the world, as a gesture of respect perhaps, or a way of selling something, or a commemoration, as on tombstones…whose bones were dug up and put on display for a hundred years, against her will, but she was so what will did she have, what right do the dead have to will, they are dead after all” (Atwood, 2006c, p.74) This whole situation is presented as ironic because humans start off claiming that they are respecting this dead woman by honoring her name, however they end up using her as a commercial means to satisfy themselves. They put her dead remains up in a museum despite it being against her will, in order to entertain themselves. Atwood conveys both the situations explained, to be ironic since humans start off trying to be selfless, but end up being defeated by their greed. The ironic use in this story helps effectively convey the message that humans are selfish and greedy.

Similarly, Atwood uses irony in “Post-Colonial” in order to convey that human greed is an everlasting cycle. Atwood conveys this through the use of pronouns and allusion. In this short story Atwood describes two sets of pronouns the We and the Them. The We and the Them are allusions to two sets of people. The We is an allusion to the pioneers. “We say the word we even though we were not born at the time, even though our parents were not born, even though the ancestors of our ancestors have may have come from somewhere else entirely, some place with dubious hats and with a flag quite different from the one that was wafted ashore here.” (Atwood, 2006b, p.99)  The We is an allusion to the pioneers and us humans living now who took over the Native inhabitants, the Them, long time ago. “We muse about the time before, we muse about the something that was done, we muse about the Native inhabitants, who had a bad time of it at our hands despite arrows, or conversely, despite helpfulness.” (Atwood, 2006b, p.98)  In this story Atwood conveys that the Them were displaced by the We in search for more land and resources. The greed of the We compelled them to displace the Them. The irony that Atwood suggests in this story is that if the We took over the Them because of greed then won’t another group of people displace the We? “Who are we, now,…and who are they? Is that them, landing in their illicit boats, at night?...What are their plans, immediate, long-term, and will these plans of theirs serve us right? It’s a constant worry, this we, this them.” (Atwood, 2006b, p.100)  This is ironic since the We took over the Them for greed and now some other group with take over the We. Atwood shows this irony in order to convey this everlasting cycle of greed that humans have and that the human society is negative. Humans are able to kill others so brutally just for their greed, however eventually we will be replaced by another set of greedy humans and it will go on.

Atwood also conveys irony in the story “Chicken Little Goes Too Far” in order to convey how selfish and greedy humans are. Atwood does this through the use of allusion and extended metaphor. In this short story Atwood alludes to the fable that is widely recognized by everyone. In the fable Chicken Little goes around screaming that the sky is going to fall and eventually gets eaten up by Foxy Loxy. In this short story through the use of extended metaphor Atwood conveys how the fable is similar to our society now. In this story Chicken Little is a metaphor for a less important person in the society who realizes that the sky is falling. The sky is falling is a metaphor for the corruptness of the society that keeps increasing. Day by day the morals and values that are present in society keep decreasing, and Chicken Little points out that eventually there will be none. In order to keep our selfish needs in order, Atwood conveys that we are loosing all sense of morality and virtue. “I don't see that it makes a blind bit of difference whether the earth is rising or the sky is falling, said Chicken Little, as the end result in either case will be that we are minus a sky.” (Atwood, 2006a, p.68)  The irony in this story is that Chicken Little who is a metaphor for a less significant person in the society realizes that the sky is falling, but the big people like the corporate owners do not, and even if they do, fail to accept it. In this story Hoggy Groggy acts as a metaphor for the corporate owners who wants to make Chicken Little disappear before he makes a bigger deal about the situation. “This Chicken What’s-his-name twerp is making a dent, Hoggy Groggy told Foxy Loxy. He’s giving me a headache. He’s against progress. You should put him out of his misery.” (Atwood, 2006a, p.71)  Atwood conveys that corporate's, in order for their own selfish needs, make those like Chicken Little, disappear who realize what is happening to the society. The corporate's think of it as “progress”, when really it is just demeaning our society. This whole story is ironic since Atwood makes us realize that it should be the leaders of our society like the corporate owners, who claim to make our society progress that should realize what is happening. They should be the ones to stop the corruptness and selfishness, but it is the little people like Chicken Little who are.

Atwood’s central aspect in three of her stories, “Thylacine Ragout”, “Post-Colonial, and “Chicken Little Goes Too Far” in the collection of her short stories The Tent is irony. Atwood through irony conveys how the human society is greedy and

selfish. Atwood in these three short stories take a negative tone towards the human society and tries to convey this message to the audience in order to make them aware of the current human situation of our society.