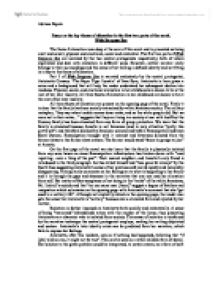 Essay on the key theme of alienation in the first two parts of the novel.Wide Sargasso Sea

The separation of Antoinette from the world is also shown when she shares with us her frustration due to being rejected by "negros" who "called [them] white cockroaches". But even as she doesn't show her feelings, she makes use of many images to communicate to the readers her true feelings. Making this reference to how "they hated [them]", introduces a further step into alienation taken by Antoinette, ultimately making her solitary life a refuge for her. Her alienation is again demonstrated by her lack of self-awareness, which in turn indicates her little sense of identity. Antoinette's fragile identity is exposed to us when Tia speaks through her. Moreover, when Tia tells her that "black nigger better than white nigger", Antoinette, along with us, experiences another rejection. This rejection ends in a problematic confusion of identities. In this novel dresses are powerful symbols of identity, so an exchange of these occurring between Tia and Antoinette depicts how Antoinette loses grip of her identity. From this point on, her narrative becomes fatalistic. Dreams also play a very important role within this novel. The first dream Antoinette has narrates how "someone who hated [her] was with [her], out of sight", suggesting that she is to some degree paranoid due to her feeling alone and fragile. ...read more.

He describes how "every moment he made was an effort of will and sometimes he wondered that no one notices this". This sense of rejecting her wife is consolidated by Daniel Cosway's letter addressed to him as "urgent" and portraying Antoinette as a mad woman who would destroy him completely. This new vision Rochester develops towards his wife is increased by the "names he calls her", such as Bertha and Marionette. This finalizes by destroying all the sense of identity that Antoinette had left, pushing her into madness. It could be argued that Antoinette's decline into madness was the product of both her and her husband's feel of alienation. Taking into consideration all of the above arguments, it can be deduced that alienation is a key motif of "Wide Sargasso Sea". It is presented in many ways, and it could be regarded as an excuse for the decline into madness that both of the protagonists suffer. However, Antoinette's alienation is expanded to a wider extent than that of Rochester; this could be because she is the one who is considered mad and without any "reason". The alienation these characters suffer enables us to feel sympathy towards them, creating a sense of consideration for them which is key for the understanding of the novel. ?? ?? ?? ?? Adriana Zapata ...read more.