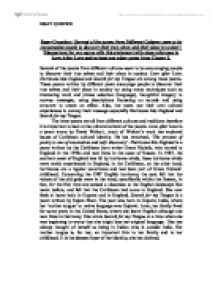 Essay Question: 'Several of the poems from Different Cultures seem to be encouraging people to discover their true selves and

The poet means that she finally feels at home in England, and that wherever you may find yourself on this planet, you will eventually find peace with your place in society. Search for my tongue uses the word 'tongue' for many different meanings. The poet, Sujata Bhatt, plays with these different meanings. For example, she imagines that knowing two languages is like having 'two tongues in your mouth' (line 4) and speaks of her original language as being her 'mother tongue' (line 5). The poem begins colloquially, using everyday language, but then develops to employing striking imagery and language. The poem begins by appearing to answer a question- 'You ask me what I mean...' (line1). If you are replying to a question someone has posed, you would use natural speech. However, if you really want to get your message across, you should turn the question back on the questioner- 'I ask you, what would you do...' (line 3). The poet uses 'shock tactics' or such striking images to do that. It could be said that if the poem says more or less the same thing twice in two languages, then it might just is well be written in only one language. However, the whole point of the poem would then be lost. The same thing being said in two languages is the key, the poet has 'two tongues' and she doesn't want to loose one of them. ...read more.

In the first stanza she tells us how hard it is for her to know two languages and how she has neglected the one she feels most belongs to her. In the second stanza she explains these ideas in Gujarati. In the final stanza she then translates her thoughts for us into English, lines 31-39 meaning something similar to lines 17-30, showing that although her 'mother tongue' (line 38) dies during the day, it 'grows back' ( line 31) in her dreams at night, becoming strong and producing 'blossoms' (line 39). Of all these three poems Hurricane Hits England is the largest. The poem is written in eight stanzas of varying lengths. The lines themselves are also of varying lengths. This irregularity helps us to see how unpredictable the hurricane is, and how unpredictable the woman's thoughts are. The first stanza of the poem is in the third person, as the reader is introduced to the woman, but the majority of it is written in the 1st person. Love after Love, Search for my tongue and Hurricane Hits England are three poems from Different Cultures which encourage people to discover their true selves and their place in society. The poets who wrote the poems do this by, the poetic devices they use, significant use of language and imagery and significant use of style and structure. All of these ideas and style are influenced by the poets' cultural backgrounds. ?? ?? ?? ?? ESSAY QUESTION ...read more.