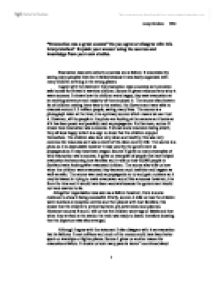 &quot;Evacuation was a great success&quot; Do you agree or disagree with this interpretation? Explain your answer using the sources and knowledge from your own studies.

"Evacuation was a great success" Do you agree or disagree with this interpretation? Explain your answer using the sources and knowledge from your own studies. Evacuation was seen as both a success and a failure. It succeeded by saving many peoples lives but it failed because it was badly organised with many children arriving in the wrong places. I agree with the statement that evacuation was a success as it provided safe homes for Britain's wartime children. Source B gives evidence as to why it was a success. It shows how the children were happy, they saw evacuation as an exciting adventure and majority of them enjoyed it. The source also shows a lot of children making there way to the station; the Government were able to evacuate around 1.5 million people, saving many lives. The source is a photograph taken at the time; it is a primary source which means we can trust it. ...read more.

Although I agree with the statement I also disagree with it as evacuation had its failures. It cost millions and much of the money could have been better spent on warships or fighter planes. Source I gives us another reason for evacuations failure. It shows us how many parents weren't convinced about sending their children away; they believed that the west would not have the resources to look after their children and that they would be better off at home. This was true as the bomb damage was not as bad as expected. Instead of 10,000 people being killed every air raid only 60,595 were killed throughout the whole war; however we only know this through hindsight. The source is reliable as evidence because it was part of the Mass Observation Survey; it intended to gain the public opinion so there is no reason for it to lie, however it is only one person's point of view. ...read more.

Evacuation caused a great deal of unhappiness; families were broken up and both parents and children were miserable. This was a failure for evacuation because by January 1940 four out of ten evacuees had returned home and around nine out of ten mothers had also returned. In conclusion, I agree with the interpretation that evacuation was a success. Its main aim was to save the lives of Britain's wartime children and that was what it did. If the children had remained in Cities many would have been killed. Furthermore, it was a powerful social force as many children had their eyes opened to a whole new way of live which they hadn't known existed. Many people were appalled at the conditions of the children they saw and after the war they wanted to stamp out poverty; due to evacuation a fairer society was born. To a large extent I agree with the interpretation however evacuation caused a great deal of unhappiness for both children and parents. Jenny Graham 10M 1 ...read more.