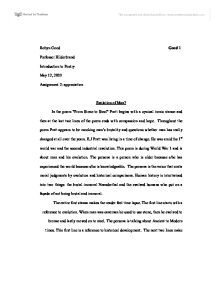 Robyn Good Good 1 Professor Hilderbrand Introduction to Poetry May 12, 2003 Assignment 2: appreciation Evolution of Man? In the poem "From Stone to Steel" Pratt begins with a cynical ironic stance and then at the last two lines of the poem ends with compassion and hope. Throughout the poem Pratt appears to be mocking man's brutality and questions whether man has really changed at all over the years. E.J Pratt was living in a time of change. He was amid the 1st world war and the second industrial revolution. This poem is during World War 1 and is about man and his evolution. The persona is a person who is older because s/he has experienced the world because s/he is knowledgeable. The persona is the voice that emits moral judgments by evolution and historical comparisons. Human history is intertwined into two things: the brutal immoral Neanderthal and the evolved humans who put on a fa�ade of not being brutal and immoral. ...read more.

The persona is trying to get the reader of the time to see that humanity is taking a step back in human development. People are starting to act without reason like the Neanderthal man. In the third stanza it brings up how humans have the desire to evolve. Our desires have taken over us. They used to be for improving human knowledge, but have turned into adifferent purpose now. The persona says it "Has but matured a toxic wine." The desire has gone bad just like toxic wine. People have become addicted to their desires. The world is now being destroyed by human desires. In line 3 the persona says that mans Good 3 desire to improve has always been present, but not to the extent of the present day. The persona proves his point saying it is desire that reddened Euphrates or Rhine. The Jews wanted to evolve into there own people. The fourth stanza is about religion and that the cave man still. ...read more.

This poem lets the reader sit back and think about human evolution. The poem raises many questions about the evolution of man. The poem asks has man really evolved or is man still brutal, do we hide it with our fa�ade of morals and spirituality. The persona does believe though there is an answer, the truth lies down the road of Heaven. Good 5 From Stone to Steel From stone to bronze, from bronze to steel Along the road-dust of the sun, Two revolutions of the wheel From Java to Geneva run. The snarl Neanderthal is worn Close to the smiling Aryan lips, The civil polish of the horn Gleams from our praying finger tips. The evolution of desire Has but matured a toxic wine, Drunk long before its heady fire Reddened Euphrates or the Rhine. Between the temple and the cave The boundary lies tissue thin: The yearlings still the altars crave As satisfaction for a sin. The road goes up, the road goes down - Let Java or Geneva be - But whether to the cross or crown, The path lies through Gethsemane. ...read more.