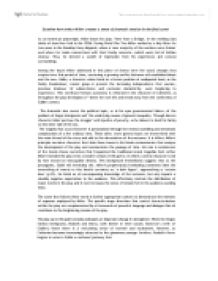 Examine how Arthur Miller creates a sense of dramatic tension in the final scene As an American playwright, Miller bases his play; 'View from a Bridge', in the working class docks of slum New York in the 1950s. During World War Two Miller worked as a ship fitter for two years in the Brooklyn Navy shipyard, where a 'near majority of the workers were Italian' and where he 'made connections with their family concerns...(which were) full of Sicilian dramas.' Thus, he derived a wealth of inspiration from his experiences and cultural surroundings. Among the issues Miller addressed in this piece of drama were the social changes that erupted over this period of time, construing a growing conflict between old established ideals and the new. Eddie, a character whom holds to a former position of undisputed head, as the family breadwinner, cannot grasp or prevent the increasing independence that women, previous shadows "of subservience and exclusive domesticity, were beginning to experience. This newfound female autonomy is reflected in the character of Catherine, as throughout the play she begins to'" direct her own life and break away from the conformity of Eddie's control. The dramatist also covers the political topic, or in his eyes governmental failure, of the problem of illegal immigrants and "the underlying causes of general inequality. Through Marco's character Miller portrays the struggle' arid injustice of poverty, as he labours to feed his family on the other side of the sea. The tragedy that occurs however is personalised through the mental stumbling and emotional complications of a few ordinary lives. ...read more.

The audience have to keep pace with the changing atmosphere the characters create and become alert to signs of oncoming strain. Characters within the play also display their sense of the rising tension, and this supports the audience's suspicions" as they begin to see tension as the underlying compass directing the play to its outcome. When Rodolfo and Marco converse with Eddie the stage directions show them; '(rising)' (p.36), in, although a clear mark of respect for an Eddie, a demonstration that they are not assuredly comfortable and at home in his house or presence. Their physical levels are uneven, disquieting and may even foretell how these characters will figuratively stand with each other by the end of the play. Moreover, when Catherine initiates a dance with Rodolfo, stating her independence Eddie, he; '(...freezes)'. Rodolfo discerns his disapproval and dances; '(stiffly)' as he feels; '(... Eddie's eyes on his back.)' (p.39)" When Rodolfo and Catherine dance, Miller directs Marco as simply; '(waiting)', expectant of a reaction from Eddie, being vaguely aware of some inner issues battling inside him concerning their relationship. When Eddie teaches Rodolfo some boxing, Marco is described as; '(dubious)', even; '(uneasy)' as he senses a double meaning to Eddie's actions, and is insightful of a colder calculation he is harbouring. Marco is discerning of Eddie's character Throughout the play, slowly absorbing and carefully analysing his every word and -"move. He seeks to understand Eddie with direct language asking; 'What does he (Rodolfo) do wrong?'(p.38) this outright, reasonable question stumbles Eddie because he cannot respond with an outright, reasonable answer. ...read more.

When hearing that 'Rodolfo cooks' Eddie; '(lowers his newspaper)', a slow, deliberate motion conducive to disbelief and paving the way for a sarcastic response. '-His next expressions are mocking; 'It's wonderful. He sings. He cooks. He could make dresses'. This utterly alien concept of a man to Eddie plunges him into an unconscious outburst of emotional exposure. The constant comparisons he makes of himself against Rodolfo exhibits his resentful feelings toward him, and uncertainty in himself. He is; '(driven on)' his careless publicity of his own weaknesses , frantically trying to make sense of his words but only betraying his overwhelming jealousy further still, fully; '(..Exposing the issue)'. The newspaper he is; '(twisting)' in physical response to his irritation, '(tears in two)', a motif of the strength of his frustrations, and inability to control them. With this unnerving act Eddie; '(pulls his pants over his belly)' in personal reclaim of his masculine dignity (p.40). The startling subject of boxing, so suddenly approached by Eddie arouses suspicions in the audience and in the play based on uncertainty of Eddie's thoughts and motivations. Catherine is described as being; '(nervously happy, mystified)' at his sudden change of character and does not fully understand it. Eddie is described as; '(weirdly elated)', gripped by some secret, scheming perversion that could be exploited in; 'teaching Rodolfo to box'. The idea of even light hearted boxing is extremely disturbing to the audience, who now have full knowledge of the extent to which Eddie's jealousy lies. This first inclination toward violence also foretells the greater more dangerous role it will play in the outcome of the tragedy. ...read more.