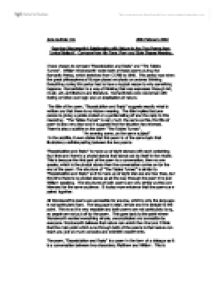 Examine Wordsworth's Relationship with Nature in Any Two Poems from &quot;Lyrical Ballads&quot;. Compare How His Tone, Form and Style Shapes Meaning.

Jane Guthrie 11G 20th February 2002 Examine Wordsworth's Relationship with Nature in Any Two Poems from "Lyrical Ballads". Compare How His Tone, Form and Style Shapes Meaning. I have chosen to compare "Expostulation and Reply" and "The Tables Turned". William Wordsworth wrote both of these poems during the Romantic Period, which stretched from C1789 to 1840. This period was when the great philosophers of Europe placed emphasis on ordered thinking. Everything during this period had to have a logical reason to why something happens. Romanticism is a way of thinking that was expressed through Art, music, art, architecture and literature. Romanticists were concerned with feeling emotion over logic and an idealisation of nature. The title of the poem, "Expostulation and Reply" suggests exactly what is written and that there is no hidden meaning. The title implies that one person is giving a gentle protest or a gentle telling off and the reply to this reasoning. "The Tables Turned" is very much the same as this, the title of poem is also very clear and it suggests that the situation has reversed. There is also a subtitle on the poem "The Tables Turned". "An evening scene, on the same subject" In the subtitle, it even states that this poem is of the same topic that illustrates a definite pairing between the two poems. ...read more.

Matthew speaks in the first part of the poem, he speaks in a very critical manner to William, and he is also very inquisitive by starting the poem by asking a question with a faultfinding manner. "Why William, on that old grey stone" This very questioning and the accusation of William having a lack of desire to learn from books, continues throughout Matthew's part of the dialogue. As Matthew really cannot understand how William can sit around all day and look at his surroundings. In "The Tables Turned", William's manner is very urgent in trying to reply Matthew. Although William does also reply in "Expostulation and Reply" but not too the extent he does in "The Tables Turned". "Up! Up!" This quote is repeated to emphasise the urgency of it all, as William wants to portray his opinions of nature. What is interesting is that "Up! Up!" is also used in "Expostulation and Reply" by Matthew. The exclamation marks show the urgency and an abruptness, it is like William is repeating this deliberately to place pressure on Matthew, as now everything is reversed and the tables are turned! The tone of "Expostulation and Reply" is very critical to start with and it tries to be persuasive through the use of emotive language throughout the poem. ...read more.

The use of personification is used in both poems to describe nature. It is interesting that the world is described as "she" "She has a world of ready wealth" The sun is also personified, in both cases, it shows that here, Wordworth things as light being knowledge, saying that our eyes are open to knowledge and it is up to us to take that knowledge. The use of emotive language in the poem "The Tables Turned" is interesting as William portrays the image of murder to feed inquisitive minds of that particular period, in which he thinks is wrong. 'We murder to dissect". The words used are very strong and emotive and he is saying about the desire to cut things up intentionally to find out why it is there. William is using very emotive language here to view his point. It is obvious through both poems that Wordsworth enjoys nature and he wants everyone to appreciate it. In the first poem, Wordsworth has written it to show both sides of the story through the use of the two characters, Matthew and William. Matthew is the character in who is a typical person from the romantic period wanting to know why everything there. William is the character that does not want to know a reason for everything, and is there to appreciate nature; he does this in the second poem and in the second half of "Expostulation and Reply". ...read more.