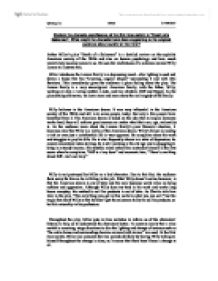 Explore the dramatic significance of the first time switch in &quot;Death of a Salesman&quot;. What might the dramatist have been suggesting to the original audience about society at that time?

Explore the dramatic significance of the first time switch in "Death of a Salesman". What might the dramatist have been suggesting to the original audience about society at that time? Arthur Miller's play "Death of a Salesman" is a detailed review on the capitalist American society of the 1940s and also on human psychology and how much materialistic success means to us. He uses the misfortunes of a salesman named Willy Loman to illustrate this. Miller introduces the Loman family in a depressing mood-dim lighting is used and shows a house that has "towering, angular shapes" surrounding it and with little furniture. This immediately gives the audience a glum feeling about the play. The Loman family is a very stereotypical American family, with the father, Willy, working all day, a loving mother, Linda, and two children, Biff and Happy. As the play develops however, we learn more and more about the real tragedy of the family. Willy believes in the American dream. It was very influential in the American society of the 1940s and still is to some people, today. But only a few people have benefited from it. The American dream is based on the idea that as long as someone works hard, they will achieve great success no matter what their sex, age, nationality is. ...read more.

He works for success all his life, and when he fails, he makes himself believe that he is popular, and therefore successful, according to his theory. As we see later in the scene, Willy isn't making much money-he boasts that he has sold 1200 gross of goods when in fact he has only sold 200. The good mood of the time switch is destroyed when Willy contradicts himself by first saying "Chevrolet, Linda, is the greatest car ever built." Then when he needs to spend money to repair it, he exclaims to Linda, "That goddam Chevrolet, they ought to prohibit the manufacture of that car!" Here we see a dark reflection of Willy's confused mind like it was in the first scene. From that point on, Willy admits to Linda that his business is not going well at all. In contradiction to what he had told the boys at the beginning of the scene-that he was very popular and even met the Mayor of providence, he now confesses to Linda, "I know it when I walk in. They seem to laugh at me.", "I'm not noticed." and, "I'm fat. I'm very - foolish to look at..." Linda responds by comforting Willy. This shows that she accepts Willy's faults as she has heard Willy's statements about being very popular and his confession about not being well liked but she does not criticise him for it. ...read more.

Happy is similar to Linda, as he accepts his cold treatment from Willy. He constantly wants to get into Willy's good books-"I'm losin' weight pop, you notice?" and "I'm going to get married, just you wait and see." He is a womaniser and is very corrupt when he is older. Like Willy, Happy believes in the American dream, and he is not what he claims he is. Miller's usage of the time switch is very effective. The stage directions are cleverly set and he uses it to give us an image of what the characters were like. Through the time switch, we see how the characters have changed. After the opening scene, the general mood is set. Carrying on the exposition of the play by creating a time switch after the opening scene forms a very effective juxtaposition as it shows how the characters have developed. Miller uses Willy Loman's failure to attack the idea of the American dream in society, pointing out the faults and the unfairness of the merciless capitalist system, in which the only way to raise your social status was to gain wealth and material possessions. More importantly however, the play warns people not to follow Willy's example: confusing the real world with the idealistic world and lying to yourself when there is a problem. Always think and act realistically, not how you would like to, as things don't always go your way. Qiming Liu 10SM 27/04/2007 ...read more.