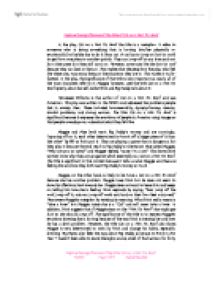 In the play, Cat on a Hot Tin Roof the title is a metaphor. It refers to someone who is doing something that is hurting him/her physically or emotionally but he/she has to do it like a cat. A cat has to jump on hot tin roofs to get from one place to another quickly. They can jump off at any time and not burn their paws but they still carry on. However, some cats like the hot tin roof because they can bask in the sun. This implies that the people in the play, who feel like these cats, may enjoy being in the situations they are in. This makes it multi-faceted. In the play, the significance of the title is very important as nearly all of the main characters refer to it. Maggie, however, uses the title Cat on a Hot Tin Roof openly about her self, whilst Brick and Big Daddy talk about it.

Tennessee Williams is the author of Cat on a Hot Tin Roof and was American. This play was written in the 1950’s and addressed the problems people had in society then. These included homosexuality, dynasty/money, dreams, alcohol problems, and strong women. The title Cat on a Hot Tin Roof is significant because it expresses the emotions of people in America using images so that people nowadays can understand what they felt like.

Maggie and Mae both want Big Daddy’s money and are cunningly, “squaring off on it, each other determined to knock off a bigger piece of it than the other” (p.56) as Brick put it. They are playing a game that is dangerous but they play it because the end result is Big Daddy’s inheritance. Mae asked Maggie, “Why are you so catty?” and Maggie replied, “cause I’m a cat!” This shows both women know who they are up against which essentially is a Cat on a Hot Tin Roof. The title is significant in this context because it tells us what Maggie and Mae are feeling like and how they both want Big Daddy’s money so much.

Maggie, on the other hand, is likely to be more a Cat on a Hot Tin Roof because she has another problem. Maggie loves Brick but he does not seem to show his affections back towards her. Maggie does not want to leave him and keeps on telling him how she is feeling. Brick responds by saying, “then jump off the roof, jump off it, cats can jump off roofs and land on their four feet uninjured!” He answers Maggie’s metaphor by twisting its meaning. What Brick really means is “take a lover” but Maggie insists she is a “Cat”and will never take a lover. In addition, Brick suggests that if Maggie stays on the “Hot Tin Roof” she might get hurt so she should jump off. The significance of the title is to express Maggie’s emotions showing she is hurting because of the way Brick is treating her and how he has a drink problem. However, the title Cat on a Hot Tin Roof also shows Maggie is very determined to stick by Brick and change his habits, especially drinking. Big Mama also feels this way about Big Daddy as he says to Brick in Act Two “I haven’t been able to stand the sight, sound, smell of that woman for forty years now!” Big Daddy almost completely tries to ignore Big Mamma without a care for her feelings or if he hurts them.

Brick is savage like in the play because he uses his crutch as a weapon in Act One, and Big Daddy uses it in Act Two. This shows that the women of the play are not the only ones acting like animals. Brick and Big Daddy also talk about the women being catty. They link this behaviour to lying which they think separates themselves from the women’s malice. However, this is partly hypocritical on Bricks behalf as he is lying to Big Daddy by telling him everything is fine and there is no Cancer. This signifies all the characters have animal qualities and in actual fact, every human has them too, which may be why they lie and make mistakes.

Maggie is portrayed as a sassy character through the play and the theatre production, where Maggie is played by Lesley Harcourt, and the film, where she is played by Elizabeth Taylor. Both women in the productions wear white low-neck dresses and in the theatre, Maggie has long nails polished red. This suggests they are claws and she is ready to fight for what she wants. This is significant because it links with the title of the play and carries it right through to costume and design. Maggie’s motives are sneaky and she has many troubles but she puts a loving front on for others especially Big Mama and Big Daddy. This is similar to a cat because they look sweet and innocent on the outside, but if you do something they do not like, they will scratch you or bite you.

Animal imagery is used throughout the play with Maggie saying the most in her script. She refers to Mae and Gooper’s children as “no-neck monsters” and “pigs at a trough.” The title Cat on a Hot Tin Roof is significant here because it flows and fits in with the whole theme. Not only does it show that the characters may be behaving like animals but it also shows that the characters know the others are behaving wildly. The animal imagery is used as a pejorative and a way for the characters to snipe at each other. Maggie acts like this because she wants children but Brick will not have them with her. Cats often walk across hot tin roofs to get to their partners who may live far away. This is, essentially, what Maggie is trying to do with Brick and hoping the result would be children.

However, in the film, directed by Richard Brooks, Maggie stops’ being a “Cat on a Hot Tin Roof” in the end as Brick shows his loving emotions towards her, and, Big Daddy asks Big Mama to go on a walk with him. This shows that in the end cats do get off hot tin roofs when they are where they want to be. In this case, Big Mama and Maggie know their husbands still love them. On the other hand, in the play and theatre production Brick and Big Daddy do not show any affection which implies Big Mama and Maggie are still on the tin roofs.

Cat on a Hot Tin Roof is also a very catchy title for a play. This is because it attracts the reader’s attention, as it is unusual. For a reader who is familiar with this metaphor, the book will sound interesting and for a reader who is not familiar with the metaphor curiosity will be provoked. The title is significant here because it attracts readers and prompts sales of the play.

I think the title Cat on a Hot Tin Roof is very appropriate for the story line. It links all the characters together as all of them have felt like the cat on the hot tin roof. The significance of the title is great because it is the main theme of the play, film, and theatre production. Some people during the 1950’s probably felt like cats on hot tin roofs because the society was very strict. In the play, homosexuality was condemned and having no job was considered lazy. Brick’s drinking problem was considered to be because of Maggie as Big Mamma says, “Some single men stop drinkin’ when they git married and others start! Brick never touched liquor before ….” This implies it is Maggie’s fault Brick has a problem and means that in American culture women were meant to please men no matter what they felt themselves.

Explore the significance of the title Cat on a Hot Tin Roof.